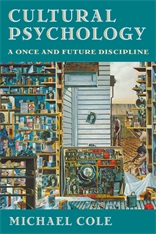 A Once and Future Discipline

“Michael Cole argues that, just as fish do not see water because they swim in it, so humans do not see culture because we swim in it. The first part of the book is a fascinating tour of the early days of psychology. He argues that when psychology tried to become a science, it stopped thinking about the culture in which individuals operate.”—New Scientist

“Michael Cole’s latest book represents an impressive synthesis of the many disciplinary strands of cultural psychology, as well as an inspiration for this discipline… Cole’s tale is made even more compelling by the account of how he was able to address the concrete theoretical, methodological, and practical problems he and his colleagues encountered while trying to take culture into consideration in their research… Cole’s book should be of interest to a broad audience concerned with the systematic examination of culture and mind… All educators concerned with creating, evaluating, and sustaining productive environments for learning are likely to find both examples and analytic tools that may help them in their ventures. Cole’s subtitle calls cultural psychology a ‘once and future discipline.’ With this work, he offers a significant boost to the discipline’s future.”—Joseph L. Polman and James V. Wertsch, American Journal of Education

“In a very readable, clear book, Cole uses the domain of cognitive development to show how a cultural framework can help us understand the dynamic interplay between individual, social, cultural, and historical lines of development… [It is] a convincing argument for why studying culture can open new horizons and frontiers.”—Margarita Azmitia, American Journal of Psychology

“Culture is back in psychology. Michael Cole, one of the most significant contributors to this movement, gives a thoughtful synthesis of his three decades of theoretical and empirical research in this book. Though mild-mannered in his writing, Cole’s proposal amounts to nothing less than a radical restructuring of the entire discipline of psychology as a scientific enterprise. Whether one agrees with him or not, anyone interested in the culture–mind relation should read it cover to cover. In fact, any psychologist, basic or applied, will be richly rewarded by a close reading of it… Cole’s cultural psychology is an impressive achievement with a promising future.”—Yoshihisa Kashima, Contemporary Psychology

“Michael Cole’s recent book is a fascinating combination of history, autobiography and monograph. It is written in just the way that psychology should be written. It is informed by the chequered past of this strange discipline, if indeed it is one. In the autobiographical sections the author takes us through his transformation from naïve paradigm dope to truly creative scientist. As a monograph the book consists of an exposition of ‘cultural psychology’ as a general theory of human thought and action, richly illustrated with empirical work conducted within that framework. It has the further merit of cross-referencing, so to say, some, though not all, of the other forms that the disciplinary matrix the author calls ‘cognitive psychology’ has taken in recent decades. Whenever one comes across a book of this depth and a record of this breadth of experiences, one is struck yet again by the amazing way that orthodox, methodological behaviourism and the naive cognitivist mainstream can continue to be pursued… In this remarkable book we have another volume to accompany the growing shelf-load of subtle and powerful studies that call into question the hegemony of methodological behaviourism, naïve experimentalism, the ‘quick fix’ for a few papers to support a tenure application, and mentalistic cognitivism with its hidden and quite implausible individual mental mechanisms… Let us hope that this book is widely read, and its message even more widely acted upon.”—Rom Harré, Culture & Psychology

“[This book] throws…light on Max Velman’s belief that awareness should not be thought of in terms of happenings in the brain alone, but is rather located in ‘events as perceived’—in amalgams of the external world with brain activity. After reading Cole, there’s not much room for doubt that the cultural and social world of the experiencer, as well as the physical world, enters the amalgam. To reach a full understanding of conscious mind, culture must be given as much weight as neuroscience.”—Chris Nunn, Journal of Consciousness Studies

“Does experimental psychology face a cross-cultural crisis? Michael Cole believes so, and in his engaging and lucid book…he offers the beginning of a solution. Cultural Psychology covers a wide range of topics, sometimes retrospectively, other times with an eye towards the future, and consistently woven with the threads of his own experience—from early work in Liberia, to ongoing research in the Laboratory of Comparative Human Cognition at the University of California, San Diego. Discussion varies from the theoretical to the practical to the historical, all the while painting an engaging picture of a potentially reborn discipline… The result is an excellent integration of a widely diverse set of influences, arguing for the shortcomings of general psychology while providing a positive alternative, and demonstrating the practical application of this ‘second psychology.’ …[It] is not only an interesting and excellent piece of synthesis and scholarship, but also potentially important across the multiple disciplines of philosophy, education, cognitive science, and psychology. The book should therefore appeal to a wide audience, and rightly so… Overall, Cultural Psychology is an inspiring and prescient work.”—William W. Schonbein, Philosophical Psychology

“In an increasingly diverse society, the neglect of cultural differences or their banishment as ‘extraneous variables’ should be troubling to psychologists, and Cole’s prescriptions for a new ‘cultural psychology’ are most welcome.”—Library Journal

“Herder, Wundt, Dilthey, Sapir, and all the ancestral spirits of cultural psychology must be smiling down at this book and pleased to see their once and future discipline alive and well in the writings of Michael Cole.”—Richard A. Shweder, University of Chicago

“A pathbreaking volume on cultural psychology by one of the modern masters of that subject. Full of riches.”—Jerome Bruner

“For those unconvinced by the mind as computer metaphor, for those unmoved by the all-too-easy creation of innate mental modules, for those who…believe that the truly unique aspects of human cognition are social and culturally constituted, this is the book!”—Michael Tomasello, Emory University

“Nowhere will a reader find as rich and thorough a historical account of the origins and evolution of an approach that has become increasingly influential in American psychology.”—Deanna Kuhn, Columbia University Teachers College

“Cole has carried out a heroic task and, in his usual gracious style, he has moved cultural psychology a great distance forward.”—William Kessen, Yale University

“An immensely important book. Cole is a leading researcher and theorist whose work has for decades provided impetus for advancement in our understanding of culture and mind, and this volume offers readers a big step forward. In it, Cole integrates cultural and historical ideas with the traditional findings and approaches of psychology, and he relates very important theoretical concepts to empirical work on cognition and learning in everyday life. By coordinating cultural ideas with processes of individual development as well as species development, this volume helps move the field beyond the nature-nurture dichotomy. Cultural Psychology is a valuable contribution that is sorely needed.”—Barbara Rogoff, University of California, Santa Cruz

“This clear and engaging introduction to cultural psychology will have a major impact on a wide range of readers, and its sociohistoric approaches to mind will bear reading and rereading at more advanced levels. Cultural Psychology promises to be a very important book.”—James Wertsch, Washington University in St. Louis