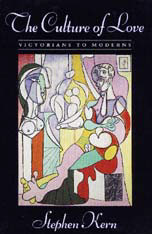 The Culture of Love

The Culture of Love interprets the sweeping change in loving that spanned a period when scientific discoveries reduced the terrors and dangers of sex, when new laws gave married women control over their earnings and their bodies, when bold novelists and artists shook off the prudishness and hypocrisy that so paralyzed the Victorians. As public opinion, family pressure, and religious conviction loosened, men and women took charge of their love. Stephen Kern argues that, in contrast to modern sex, Victorian sex was anatomically constricted, spatially confined, morally suspect, deadly serious, and abruptly over.

Kern divides love into its elements and traces profound changes in each: from waiting for love to ending it. Most revealing are the daring ways moderns began to talk about their current lovemaking as well as past lovers. While Victorians viewed jealousy as a “foreign devil,” moderns began to acknowledge responsibility for it. Desire lost its close tie with mortal sin and became the engine of artistic creation; women’s response to the marriage proposal shifted from mere consent to active choice. There were even new possibilities of kissing, beyond the sudden, blind, disembodied, and censored Victorian meeting of lips.

Kern’s evidence is mainly literature and art, including classic novels by the Brontës, Flaubert, Hugo, Eliot, Hardy, Forster, Colette, Proust, Mann, Joyce, Woolf, Lawrence, Hemingway, Fitzgerald, and Musil as well as the paintings and sculptures of Millais, Courbet, Gérôme, Rodin, Munch, Klimt, Schiele, Valadon, Chagall, Kandinsky, Kokoschka, Picasso, Matisse, and Brancusi. The book’s conceptual foundation comes from Heidegger’s existential philosophy, in particular his authentic–inauthentic distinction, which Kern adapts to make his overall interpretation and concluding affirmation of the value of authenticity: “The moderns may have lost some of the Victorians’ delicacy and poignancy, perhaps even some of their heroism, but in exchange became more reflective of what it means to be a human being in love and hence better able to make that loving more their very own.”