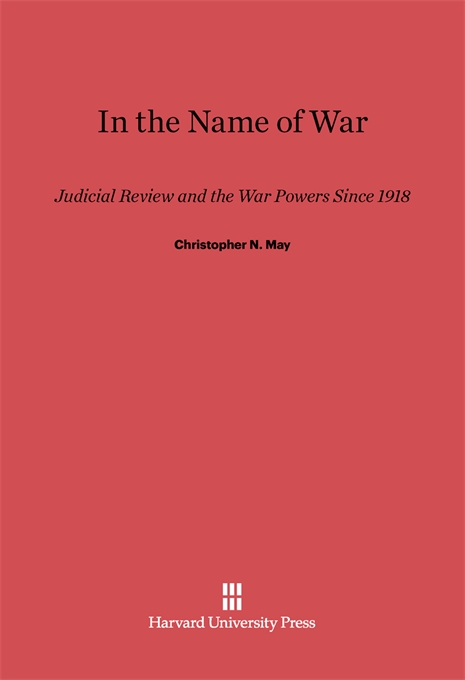 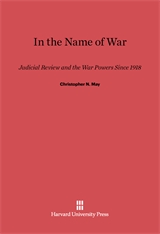 In the Name of War

Judicial Review and the War Powers since 1918

For more than a century, in settings where the political branches of government were unable or unwilling to exercise self-restraint, the Supreme Court was disposed to treat federal war powers legislation as exempt from judicial review, an attitude that permitted numerous abuses from Prohibition to press censorship.

Though the First World War officially ended in 1918, the Senate’s rejection of the Versailles Treaty kept the United States in a legal state of war until late 1921. Exploring the interplay between political and social events and the evolution of legal theory Christopher May tells how during this challenging three-year period, the government invoked the war powers to pursue ends otherwise beyond its reach: with the backing of Congress and seemingly free from judicial scrutiny, the Wilson administration took over the country’s rail and communications systems, outlawed profiteering, prosecuted strikers, suppressed “radicals” and censored the leftist press. None of these measures bore any true relation to the war, says the author, who then describes the course through which the Supreme Court, confronted by this pattern of abuse, finally abandoned its long-standing refusal to review the constitutionality of war powers legislation.

In the Name of War explores the roles played by Woodrow Wilson, Joseph Tumulty, Albert Burleson, and A. Mitchell Palmer—men whose personal ambitions frequently shaped official policy in the late Progressive Era. After analyzing the Court’s more recent record, including the internment of Japanese-Americans in World War II, May draws some practical conclusions about the use of judicial intervention in time of crisis that are sure to attract the attention of lawyers, legal scholars, historians, and students of the Constitution.