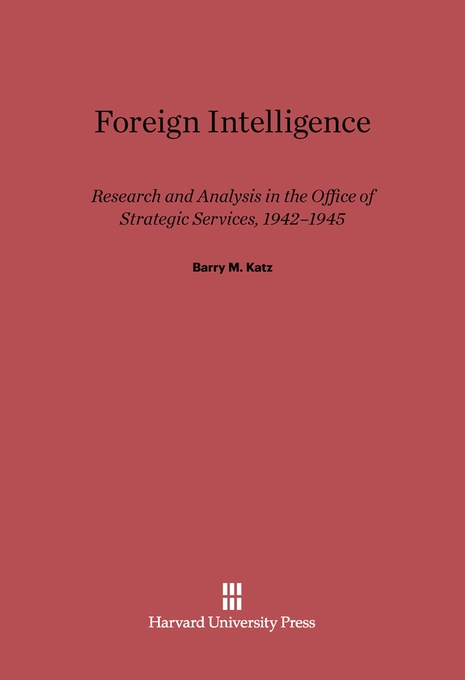 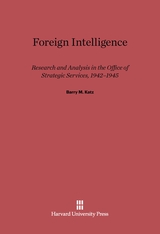 Research and Analysis in the Office of Strategic Services, 1942-1945

Much has been written about the Office of Strategic Services (OSS)—the forerunner of the CIA—and the exploits of its agents during World War II. Virtually unknown, however, is the work of the extraordinary community of scholars who were handpicked by “Wild Bill” Donovan and William L. Langer and recruited for wartime service in the OSS’s Research and Analysis Branch (R&A). Known to insiders as the “Chairborne Division,” the faculty of R&A was drawn from a dozen social science disciplines and challenged to apply its academic skills in the struggle against fascism. Its mandate: to collect, analyze, and disseminate intelligence about the enemy.

Foreign Intelligence is the first comprehensive history of this extraordinary behind-the-scenes group. The R&A Branch assembled scholars of widely divergent traditions and practices—Americans and recent European émigrés; philosophers, historians, and economists; regionalists and functionalists; Marxists and positivists—all engaged in the heady task of translating the abstractions of academic discourse into practical politics. Drawing on extensive, newly declassified archival sources, Barry M. Katz traces the careers of the key players in R&A, whose assessments helped to shape U.S. policy both during and after the war. He shows how these scholars, who included some of the most influential theorists of our time, laid the foundation of modern intelligence work. Their reports introduced the theories and methods of academic discourse into the workings of government, and when they returned to their universities after the war, their wartime experience forever transformed the world of scholarship.

Authoritative, probing, and wholly original, Foreign Intelligence not only sheds new light on this overlooked aspect of the U.S. intelligence record, it also offers a startling perspective on the history of intellectual thought in the twentieth century.