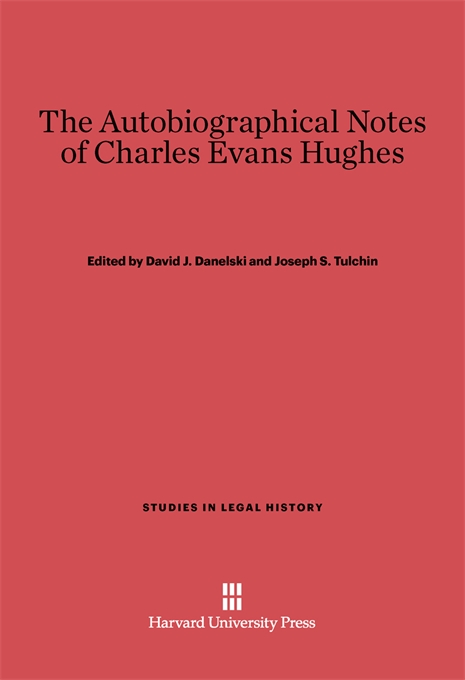 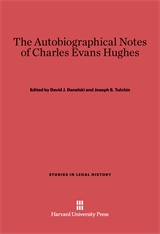 Charles Evans Hughes (1862–1948) was lawyer, governor of New York, Supreme Court Justice, presidential candidate in 1916, Secretary of State in the Harding and Coolidge administrations, a member of the World Court, and Chief Justice of the United States from 1930 until his retirement in 1941. To some, Hughes appeared larger than life. Robert H. Jackson once said of him, “[He] looks like God and talks like God.” But to those who knew him well, he was quite human, extraordinarily gifted, but human nonetheless. His Autobiographical Notes portray him as no biography could and provide comment on almost a century of American history as seen by one who played a part in shaping its course.

Hughes’s notes reveal two sides of his personality—a serious side when he was at work, and a genial, sometimes humorous, side when he was relaxing or with friends and family. When he writes of unofficial lifeespecially his boyhood, college years, and early years at the bar—he is raconteur telling his story with a certain amount of humor; when he writes of his official life he tends to be matter-of-fact. The early chapters describe the formative influence which shaped his character: his loving but intellectually demanding parents and deeply religious training; his unusual early education, which took place mostly at home and gave full scope to his precocity. Hughes’s accounts of college life in the 1870s at Madison (now Colgate) and Brown University and of his career as a young lawyer in the New York City of the 1880s and 1890s are valuable portraits of an era.

Brought up to a high sense of duty, Hughes, from the start of his career, felt bound to take worthy legal cases and it was his reputation for integrity and thoroughness that led to his selection as counsel in the gas and insurance investigations of 1905–1906. This was the turn of events that precipitated him into the public eye and, subsequently, into politics. The culmination of his career came in 1937 when he led the Supreme Court through a constitutional crisis and confronted Franklin Roosevelt in the Court packing battle. In the intervening thirty years, Hughes was a major figure in American political and legal circles. His Notes record his impressions of presidents, statesmen, and justices. His reflections on the diplomacy of the 1920s and on the causes leading up to the Second World War are of immense historical importance.

The editors have supplied an introduction to the Notes, commenting on Hughes’s personality and public image, his political style and rise to fame. They have remained unobtrusive throughout, intervening only to clarify references and provide necessary details. For the rest, they let Hughes speak for himself in the crisp and clear style that reveals his unusual intelligence and the retentive and analytical mind that distinguished his conduct of affairs.

Justice Felix Frankfurter wrote of Hughes: “I have known or know about most of the leading men of my time both here and in England enough to justify me in forming a judgment. There isn’t the slightest doubt that C.E.H. is among the few really sizable figures of my lifetime. He is three-dimensional and has impact.” Here, in these Notes, is this great man drawn in life-size proportions.