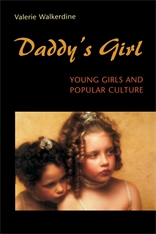 When she’s itty bitty and blond, wearing ribbons and curls and an aura of money, she’s adorable and vulnerable, the tiny, innocent heart of our culture. But when the little girl comes from the working class, she’s something else. Just what, and why so little is said about it, are the questions Valerie Walkerdine asks in Daddy’s Girl, a book about how we see young girls, how they see themselves, and how popular culture mediates the view.

Walkerdine’s study looks at little girls on television and in the movies, in advertisements and popular songs. In figures from Annie to Shirley Temple in any number of her plucky poor girl roles, she shows us little orphans saddled with the task of representing the self-sufficient working class on the one hand and the loveable object of middle class charity on the other. The real working class girl, whose fantasies feed on a strange mix of these images and the rest of what popular culture offers, with all its glamorized sex and violence, is also the object of Walkerdine’s attention. Reflecting on her own working class roots and taking us into the homes and the confidence of working class girls today as they watch television and movies and listen to popular songs, she gives us a sense, at once troubling and poignant, of the portrayal and manipulation of little girls as a canny part of the production of civilized femininity.