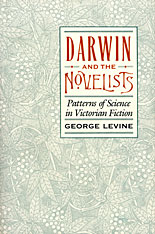 Darwin and the Novelists

Patterns of Science in Victorian Fiction

Darwin’s theory thrust human life into time and nature and subjected it to naturalistic rather than spiritual or moral analysis. Insisting on gradual and regular—lawful—change, Darwinian thought nevertheless requires acknowledgment of chance and randomness for a full explanation of biological phenomena. George Levine shows how these conceptions affected nineteenth-century novelists—from Dickens and Trollope to Conrad—and draws illuminating contrasts with the pre-Darwinian novel and the perspective of natural theology.

Levine demonstrates how even writers ostensibly uninterested in science absorbed and influenced its vision. A central chapter treats the almost aggressively unscientific Trollope as the most Darwinian of the novelists, who worked out a gradualist realism that is representative of the mainstream of Victorian fiction and strikingly consonant with key Darwinian ideas. Levine’s boldly conceived analysis of such authors as Scott and Dickens demonstrates the pervasiveness and power of this revolution in thought and sheds new light on Victorian realism.