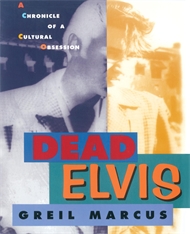 A Chronicle of a Cultural Obsession

“Marcus’s rapt attention to what Elvis continues to mean is both transmitted and justified in a splendid piece of critical art ... a marvelous and profane book about a cultural symbol of cultural symbol-making.”—David Foster Wallace, Los Angeles Times Book Review

“The evidence Marcus has gathered suggests that Presley’s posthumous appeal has to do with our ferocious ambivalence toward him, a blend of worship and revulsion, obeisance and revolutionary desire. Sympathetically despising what Presley became, everyone is now in on--not the joke, but the remaking of their world.”—Eric Lott, The Nation

“Go no further for the biggest thoughts about the biggest ever pop icon.”—Glasgow Sunday Herald

“Marcus shows that the rupture that was Elvis in 1954-57 lives on, below and above ground, glowing in grotesque and still dangerous half-life.”—W.T. Lhamon, Jr., American Quarterly