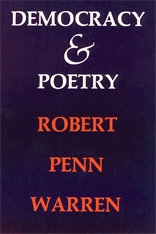 Robert Penn Warren, poet, novelist, historian, biographer, is one of this nation’s most eminent literary figures. He was born in Kentucky and is a graduate of Vanderbilt. He then earned a master’s degree at the University of California, studied at Yale, and was a Rhodes Scholar at Oxford. From his earliest days as a writer, when he was a member of "The Fugitives"—that brilliant group of young Southerners who sparked a renascence in their regional literature—to his latest accomplishment, a book of poems, Or Else, which elicited the New York Times comment that he was "one of the fathers of American poetry," Mr. Warren has concerned himself with the many forms of literature and art as they relate to American culture and society.

Over his long and distinguished career Mr. Warren was elected to the American Academy of Arts and Letters and held the Chair of Poetry of the Library of Congress. Of his numerous publications, All the King’s Men won the Pulitzer Prize for fiction (1946); Promises won the Pulitzer Prize for poetry and the National Book Award (1957). Mr. Warren was awarded the Bollingen Prize in Poetry for Selected Poems: New and Old, 1923-1966 (1967); in 1970 he received the National Medal for Literature.