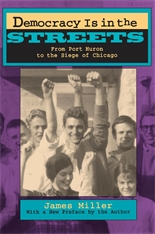 Democracy Is in the Streets

From Port Huron to the Siege of Chicago, With a New Preface by the Author

On June 12, 1962, sixty young student activists drafted a manifesto for their generation, the Port Huron Statement, that ignited a decade of dissent. Democracy Is in the Streets is the definitive history of the major people and ideas that shaped the New Left in America during that turbulent decade. Because the 1960s generation is now moving into positions of power in politics, education, the media, and business, their early history is crucial to our understanding. James Miller, in his new Preface, puts the 1960s and them into a context for our time, claiming that something of value did happen: “Most of the large questions raised by that moment of chaotic openness—political questions about the limits of freedom, and cultural questions, too, about the authority of the past and the anarchy of the new—are with us still.”