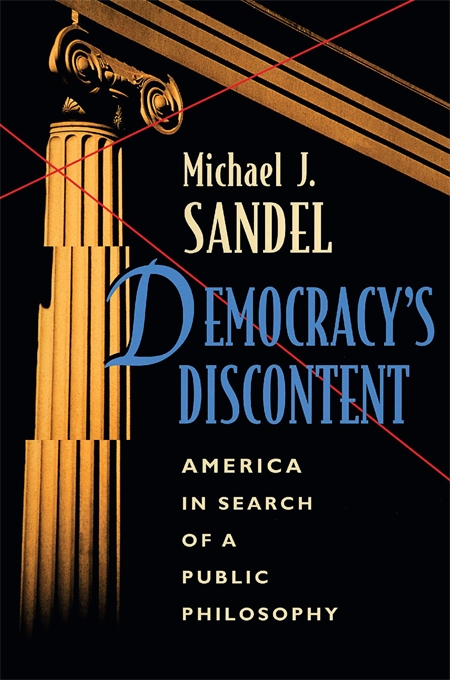 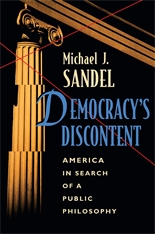 America in Search of a Public Philosophy

Despite the success of American life in the last half-century—unprecedented affluence, greater social justice for women and minorities, the end of the Cold War—our politics is rife with discontent. Americans are frustrated with government. We fear we are losing control of the forces that govern our lives, and that the moral fabric of community—from neighborhood to nation—is unraveling around us. What ails democracy in America today, and what can be done about it? Democracy’s Discontent traces our political predicament to a defect in the public philosophy by which we live. In a searching account of current controversies over the role of government, the scope of rights and entitlements, and the place of morality in politics, Michael Sandel identifies the dominant public philosophy of our time and finds it flawed.

The defect, Sandel maintains, lies in the impoverished vision of citizenship and community shared by Democrats and Republicans alike. American politics has lost its civic voice, leaving both liberals and conservatives unable to inspire the sense of community and civic engagement that self-government requires.

In search of a public philosophy adequate to our time, Sandel ranges across the American political experience, recalling the arguments of Jefferson and Hamilton, Lincoln and Douglas, Holmes and Brandeis, FDR and Reagan. He relates epic debates over slavery and industrial capitalism to contemporary controversies over the welfare state, religion, abortion, gay rights, and hate speech. Democracy’s Discontent provides a new interpretation of the American political and constitutional tradition that offers hope of rejuvenating our civic life.