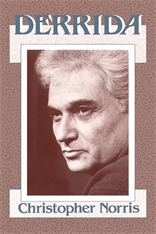 Jacques Derrida (born 1930) is undoubtedly the single most influential figure in current Anglo-American literary theory. Yet many scholars and students, not to mention general readers, would be hard put to give an account of Derrida’s own writings. In this admirably clear and intelligent introduction, Christopher Norris demonstrates that Derrida’s texts should be understood as belonging more to philosophy than to literature. Norris explains the significance of Derrida’s writing on texts in the Western philosophical tradition, from Plato to Kant, Hegel, and Husserl, placing him squarely within that tradition. He also discusses some of the reasons for the massive institutional resistance that has so far prevented philosophers from engaging seriously with Derrida’s work. This book will be welcomed by readers in search of an introduction to Derrida’s work that neither underrates its difficulties nor invests his ideas with a kind of protective mystique.