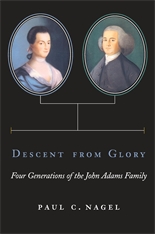 “An intelligent, tactful, and spiritually generous chronicle of a dynasty that gave the United States two presidents… This volume might be called a gift of realism that can enhance our judgment of public men and their families.”—The New Yorker

“A magnificent book on four generations of Adamses, from John to Brooks. Nagel has written a great book because he captures the pathos of time’s passage.”—The New York Times