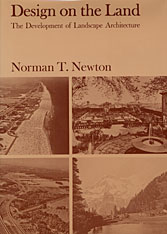 Design on the Land

The Development of Landscape Architecture

Norman T. Newton has included over 400 illustrations in his book, which conveys a basic understanding of the aims and scope of landscape architecture and offers visual analyses of major historic works, each in the context of its own time.

The first third of the study is concerned with landscape architecture in the Western world, mainly Europe, from ancient times to the mid-nineteenth century. But the major part of the work is devoted to the development of landscape architecture in the century that has passed since it acquired the status of a profession and an independent discipline.

Concentrating primarily on the United States, Mr. Newton reviews his subject from its beginnings in colonial days to the work of Olmsted, Vaux, Cleveland, Weidenmann, Eliot, Platt, and the founders of the American Society of Landscape Architects. He discusses the Columbian Exposition of 1893, the “City Beautiful” movement and the growth of city planning, the Country Place Era, town planning in England and America, American national and state parks, parkways, urban open spaces, and recent variations in professional practice.

Mr. Newton concludes his book with a timely discussion of the vital role that landscape architecture plays in the conservation of natural resources and in protection of the environment.