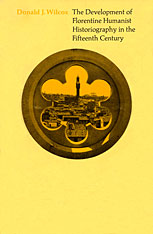 The Development of Florentine Humanist Historiography in the Fifteenth Century

Presenting a new interpretation of humanist historiography, Donald J. Wilcox traces the development of the art of historical writing among Florentine humanists in the fifteenth century. He focuses on the three chancellor historians of that century who wrote histories of Florence—Leonardo Bruni, Poggio Bracciolini, and Bartolommeo della Scala—and proposes that these men, especially Bruni, had a new concept of historical reality and introduced a new style of writing to history. But, he declares, their great contributions to the development of historiography have not been recognized because scholars have adhered to their own historical ideals in judging the humanists rather than assessing them in the context of their own century.

Mr. Wilcox introduces his study with a brief description of the historians and historical writing in Renaissance Florence. He then outlines the development of the scholarly treatment of humanist historiography and establishes the need for a more balanced interpretation. He suggests that both Hans Baron’s conception of civic humanism and Paul Oscar Kristeller’s emphasis on the rhetorical character of humanism were important developments in the general intellectual history of the Renaissance and, more specifically, that they provided a new perspective on the entire question of humanist historiography.

The heart of the book is a close textual analysis of the works of each of the three historians. The author approaches their texts in terms of their own concerns and questions, examining three basic elements of their art. The first is the nature of the reality the historian is re- counting. Mr. Wilcox asks, “What interests the writer? What is the substance of his narrative?… What does he choose from his sources…and what does he ignore? What does he interpolate into the account by drawing on his own understanding of the nature of history?” The second is the various attitudes—moral judgments, historical conceptions, analytical views—with which the historian approaches his narrative. And the third is the aspect of humanist historiography to which previous scholars have paid the least attention: the historian’s narrative technique. Mr. Wilcox identifies the difficulties involved in expressing historical ideas in narrative form and describes the means the historians developed for overcoming those difficulties. He emphasizes the positive value of rhetoric in their works and points out that they “sought by eloquence to teach men virtue.”

He devotes three chapters to Bruni, whom he considers the most original and important of the three historians. The next two chapters deal with Poggio, and the last with Scala. Throughout the book Mr. Wilcox exposes the internal connections among the three histories, thus illustrating the basic coherence of the humanist historical art.