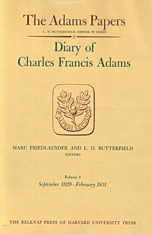 “His crankiness makes his diary fascinating… In disliking and criticizing he describes, and thus shows us the texture of his daily life… The Adamses being who they were, their trivia are apt to be American history.”—The New Yorker

“Adams wrote candidly and well about a wide range of subjects; the editors and publishers have made his writing available in the clearest possible form so that many may easily experience the particular delight of any outstanding diary the opportunity to see a man and his time through his own eyes and thoughts.”—The Baltimore Sun

“It is no attack upon these volumes to observe that the data they provide is rather low-keyed. But it is precisely because of the relatively quiet world the Diary portrays that another, perhaps equally important question is raised. It is the question of the Diary form—the peculiar aesthetic power which resides in the well-made journal. In this case, undistracted by the glitter of major historical events or novelistic renditions of personal crisis, the reader finds himself able to focus on the central experience of absorbing, entry by entry, the daily chronicle of a man’s life.”—Robert F. Lucid, The New England Quarterly

“The effect is rather that of a vastly expanded novel about nineteenth-century upper-middle-class life. Adams had not yet entered his public career; the diary is thus almost entirely personal. And this is its appeal. It gives, as few other works do, a richness of texture, a feeling for the quality of life, and a sense of the relationship of people to each other which is invaluable for the American historian.”—Page Smith, Journal of American History

“Most readers will find their fascination in the picture that Adams gives of an important American family and the life of one intelligent, highly individual member of ith…the work is a solid and graceful achievement in scholarly publishing. Would that more of Charles Francis Adams could reach a general audience. His is one of the great diaries.”—William Bentinck-Smith, Harvard Magazine