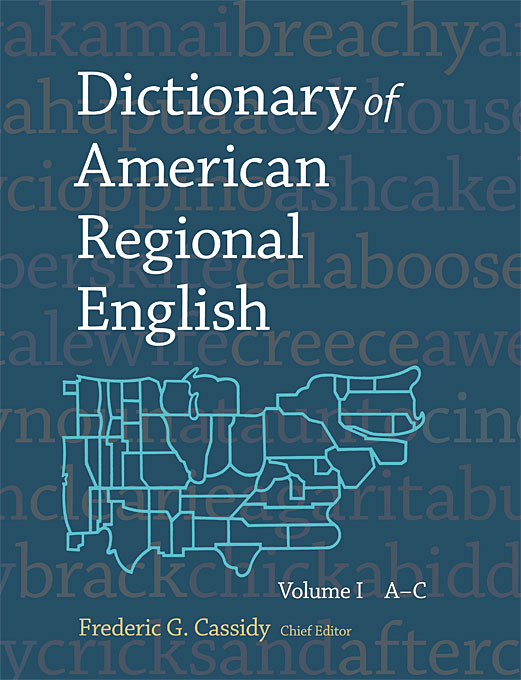 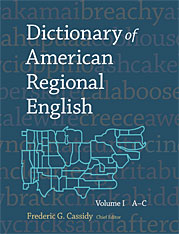 The digital Dictionary of American Regional English (daredictionary.com) offers powerful searching and interactive browsing by region, quotations with a complete bibliography, and maps illustrating where words were collected—as well as DARE Survey data and audio recordings.

How do Americans really talk—what are their hometown, everyday expressions in the many regions and sections of this huge country? The Dictionary of American Regional English (DARE), twenty years in preparation, answers these questions. It gives visible proof of the diversity—and the vitality—of American folk language, past and present.

DARE includes thousands of words and phrases not found in conventional dictionaries, and out-of-the-way meanings for common terms. Here are local names for familiar objects, from old cars to frying pans to dust-balls under the bed (176 names for these); for plants, animals, and critters real and imaginary; for rainstorms and heat waves; for foods, clothing, children’s games and adults’ pastimes; for illnesses and traditional remedies. Here are terms—salty, sarcastic, humorous—by which people describe each other, their physical appearance, characters, emotions, states of mind. Here are metaphors and similes galore.

In Wisconsin a man whose motives are suspect “has beans up his nose.” In Georgia a conceited person is “biggity”; someone important or self-important in the Northwest is “bull of the woods.” A close friend may be “bobbasheely” (Mississippi) or an “ace boon coon” (New York City). West of the Appalachians the old saw “I wouldn’t know him from Adam” becomes “I wouldn’t know him from Adam’s off-ox” (or, in the South, “from Adam’s housecat”). These and some twelve thousand other expressions are identified and explained in the first volume of DARE.

While DARE is the work of many dedicated people, it owes its existence to Frederic G. Cassidy, who in 1963 agreed to organize the project, raise funds for it, and serve as Editor-in-Chief. Cassidy trained teams of fieldworkers and equipped them with a carefully worded questionnaire: 1,847 questions grouped in 41 broad categories ranging over most aspects of everyday life and common human experience. From 1965 to 1970 the fieldworkers conducted week-long interviews with natives of 1,002 representative communities in all fifty states. The two and a half million items gleaned from the fieldwork, coded and computer-processed, are DARE’s primary data base, a rich harvest of regional Americanisms current in the seventh decade of this century. Earlier collections have been drawn upon as well, notably the 40,000 expressions recorded by the American Dialect Society since 1889; and some 5,000 publications, including regional novels and diaries and small-town newspapers, have been combed for local idioms.

A unique feature of the dictionary is the computer-generated maps that accompany many of the entries to show the geographical distribution of the term. The base map is schematic, distorting the areas of the states to reflect their population density.

Volume I includes extensive introductory material on DARE itself and on American folk speech. Its entries, from Aaron’s rod to czarnina, cover nearly a quarter of the total DARE corpus.