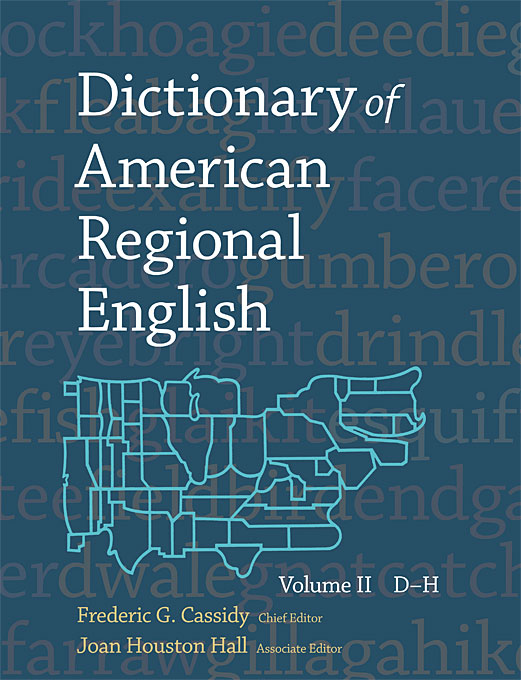 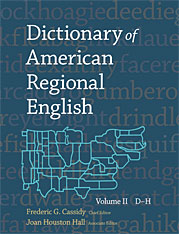 The digital Dictionary of American Regional English (daredictionary.com) offers powerful searching and interactive browsing by region, quotations with a complete bibliography, and maps illustrating where words were collected—as well as DARE Survey data and audio recordings.

Volume I of the Dictionary of American Regional English (DARE), published to wide acclaim in 1985, captured the wondrous variety and creativeness of American folk words and expressions and tickled the imagination of lovers of language around the world. Decades in preparation, the DARE corpus reflects the liveliness of English as it is spoken on America’s main streets and country roads—the regional metaphors and similes passed along within homes and communities.

Like its popular predecessor, Volume II is a treasury of vernacular Americanisms. In Virginia a goldfinch is a dandelion bird, in Missouri an insufficient rain shower a drizzle-fizzle. Gate was Louis Armstrong’s favorite sender (a verbal spur to a sidekick in a band), a usage that probably originated from the fact that gates swing. Readers will bedazzled by the wealth of entries—more than 11,000—contained in this second volume alone. The two and a half pages on “dirt” reveal that a small marble is a dirt pea in the South. To eat dried apples, a curious rural euphemism for becoming pregnant, appears in the five pages on “eat.” Seven pages on “horn” and related words take readers on a tour of the animal and nether worlds: horned lark, horned frog, horned pout (look that one up), and that horned fellow, the devil.

Initiated under the leadership of Frederic G. Cassidy, DARE represents an unprecedented attempt to document the living language of the entire country. The project’s primary tool was a carefully worded survey of 1,847 questions touching on most aspects of everyday life and human experience. Over a five-year period fieldworkers interviewed natives of 1,002 communities, a patchwork of the United States in all its diversity.

The result is a database of more than two and a half million items—a monument to the richness of American folk speech. Additionally, some 7,000 publications, including novels, diaries, and small-town newspapers, have yielded a bountiful harvest of local idioms. Computer-generated maps accompanying many of the entries illustrate the regional distribution of words and phrases.

The entries contained in Volume II—from the poetic and humorous to the witty and downright bawdy—will delight and inform readers.