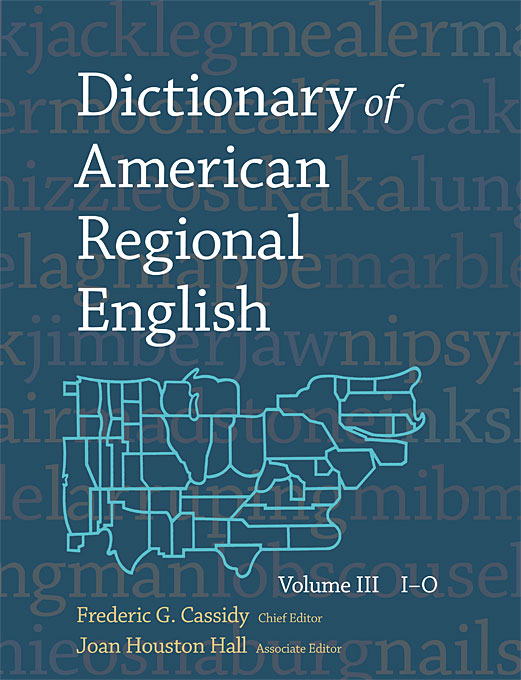 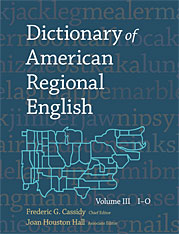 “A flat-out excellent continuation of the first volume… DARE must be seen as having an influence on the field of lexicography when editors of other dictionaries look to it for guidance. This type of influence previously has been seen rarely, outside of the pervasive influence exercised by the OED… The makers of DARE, from Cassidy to copy editor, can rest assured that their work will long be used and held valuable by the American contingent of humanity.”—Thomas L. Clark, American Speech

“The dictionary [is] very easy to read and to interpret. The senses were clearly delineated, and the quotations aptly chosen… One very wise practice was the use of a double dagger “to indicate a word or sense of questionable genuineness”… An editor who had chosen not to include such items might have deprived future dialectologists of potentially important data should they happen to come across these words later… DARE has indeed become an indispensable resource for the study of American English, “a routine starting point for current and future dialect studies” (Wolfram, American Speech, 1985).”—Betty S. Phillips, American Speech

“[A] green pasture of language, perfect for browsing by a lover of words.”—James Kilpatrick, The Chicago Sun-Times

“Volume III of the Dictionary of American Regional English—or DARE, to its language-loving devotees coast to coast—is the latest installment (‘I’ to ‘O’) of the most comprehensive effort ever mounted to capture the words the American people actually use in their everyday life, words that don’t always get written down… It’s a browser’s delight and a front-row seat at the Great American Variety Show.”—Rick Horowitz, The Chicago Tribune

“The most comprehensive collection of America’s regional lexis… The third volume is, as its predecessors before it, a rich mine of information, impeccably edited and printed and a joy to read. We are looking forward to the volumes still to come, hoping they will be published soon.”—Indogermanische Forschungen

“Editor Frederic G. Cassidy and associate editior Joan Houston Hall have an appetite for American dialect suited to their painstaking work on what may be the great reference work of our age… But while the OED’s English is like Latin—a linguistic fossil bed—DARE documents a living, mutable language… DARE offers delights on every page, the taxonomy of 10,000 fanciful American constructions,turns of phrase and words that don’t mean what you think.”—David Medaris, Isthmus

“The content of the DARE volumes is both enlightening and entertaining… Anyone with an interest in American history and life in general will enjoy browsing through this volume.”—Kay O. Cornelius, Language and Linguistics

“In DARE, it’s the speakers who get their say. A trip through its pages is part Trivial Pursuit®, part scholarship, and part treasure hunt.”—Bob Secter, The Los Angeles Times

“Flowerpots and sinkers and cabbage patches fill the fascinating pages of the Dictionary of American Regional English (DARE), whose second volume, D to H, comes out this summer… It is not everyone’s idea of fun to cozy up with a dictionary, of course. But this is not just any old reference book. It’s a linguistic guide to America, with a little bit of Americana waiting to be discovered on every one of its 1,192 pages.”—Rick Horowitz, The Miami Herald

“It already seems clear that…the dictionary will rank as one of the glories of contemporary American scholarship…it is endlessly rewarding to dip into, and if you look up a particular word or phrase you are in constant danger of being seduced to something else… It is a work to consult, and a work to savor—a work to last a lifetime.”—John Gross, The New York Times

“To learn how [the word jerk] is used in the American dialect—and where it began—we are now blessed with Volume Three (I to O) of the Dictionary of American Regional English (DARE), coming out this month, edited by America’s lexicographical giant, Fred Cassidy, now 89, with Joan Houston Hall.”—William Safire, The New York Times Magazine

“Proof that tourism, television and technological change haven’t rounded off all the gaudy and gracious edges of the way we talk.”—William Safire, The New York Times Magazine

“From dabble (to wash or rinse quickly) right through to hyuh (i.e., here) the Dictionary of American Regional English…catalogs the crazy ways we talked before being mass-commed into a nation of mush-mouths.”—Newsweek

“This long-awaited, definitive and fascinating Dictionary of American Regional English [DARE]…is all we had hoped for and more. It includes the regional and folk language, past and present, of the old and the young, men and women, white and black, the rural and the urban, from all walks of life… Although DARE will be one of the most scholarly, comprehensive and detailed dictionaries ever completed…it will also be one of the easiest and most enjoyable to use or browse in…This is an exciting, lasting work of useful scholarship accomplished with excellence, a work that scholars and laypeople alike will study, use and enjoy for generations.”—Stuart B. Flexner, The New York Times Book Review

“[T]he regional qualities of American English continue to make our tongue colorful, gracious, even elegant. This dictionary examines those words and phrases—not the everyday ones we all use, like hand or smile or part-time… DARE is especially revealing; it shows, almost instantly, that in this country language is not fodder for regulation; language simply is, period. We all say much the same things—in sometimes very different ways… This survey of spoken English is, as its publisher proudly proclaims, unprecedented. It’s also scholarly, endlessly fascinating and enlightening. You can hear America talking from its pages.”—Howard S. Shapiro, The Philadelphia Inquirer

“Devotees of verbal arcana have never been given a richer browsing ground. But while they are discovering that a blind tiger is a place to buy and drink moonshine, or that there are 176 names for dust balls under the bed, they are also bound to be awed by the dictionary’s staggering scholarship.”—Ezra Bowen, Time