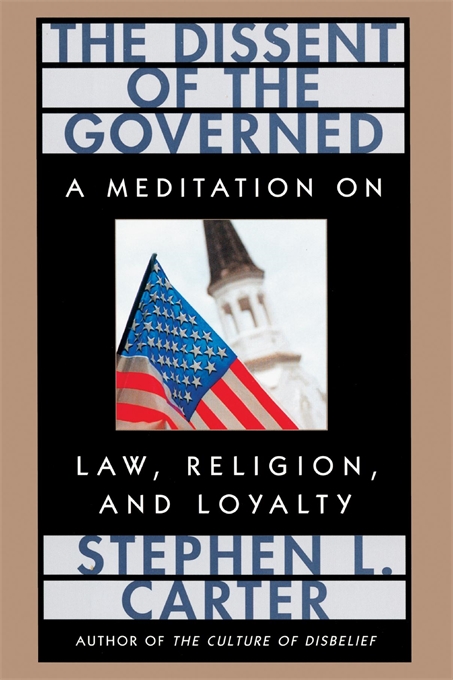 The Dissent of the Governed

A Meditation on Law, Religion, and Loyalty

Between loyalty and disobedience; between recognition of the law’s authority and realization that the law is not always right: In America, this conflict is historic, with results as glorious as the mass protests of the civil rights movement and as inglorious as the armed violence of the militia movement. In an impassioned defense of dissent, Stephen L. Carter argues for the dialogue that negotiates this conflict and keeps democracy alive. His book portrays an America dying from a refusal to engage in such a dialogue, a polity where everybody speaks, but nobody listens.

The Dissent of the Governed is an eloquent diagnosis of what ails the American body politic--the unwillingness of people in power to hear disagreement unless forced to--and a prescription for a new process of response. Carter examines the divided American political character on dissent, with special reference to religion, identifying it in unexpected places, with an eye toward amending it before it destroys our democracy.

At the heart of this work is a rereading of the Declaration of Independence that puts dissent, not consent, at the center of the question of the legitimacy of democratic government. Carter warns that our liberal constitutional ethos--the tendency to assume that the nation must everywhere be morally the same--pressures citizens to be other than themselves when being themselves would lead to disobedience. This tendency, he argues, is particularly hard on religious citizens, whose notion of community may be quite different from that of the sovereign majority of citizens. His book makes a powerful case for the autonomy of communities--especially but not exclusively religious--into which democratic citizens organize themselves as a condition for dissent, dialogue, and independence. With reference to a number of cases, Carter shows how disobedience is sometimes necessary to the heartbeat of our democracy--and how the distinction between challenging accepted norms and challenging the sovereign itself, a distinction crucial to the Declaration of Independence, must be kept alive if Americans are to progress and prosper as a nation.