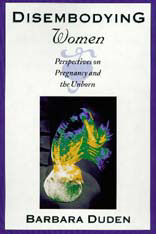 Perspectives on Pregnancy and the Unborn

In earlier times, a woman knew she was pregnant when she experienced “quickening”—she felt movement within her. Today a woman relies on what she sees in a test result or a digital sonogram image to confirm her pregnancy. A private experience once mediated by women themselves has become a public experience interpreted and controlled by medical professionals. In Disembodying Women, Barbara Duden takes a closer look at this contemporary transformation of women’s experience of pregnancy. She suggests that advances in technology and parallel changes in public discourse have refrained pregnancy as a managed process, the mother as an ecosystem, and the fetus as an endangered species.

Drawing on extensive historical research, Duden traces the graphic techniques—from anatomists’ drawings to woodcuts to X-rays and ultrasound—used to “flay” the female body and turn it inside out. Emphasizing the iconic power of the visual within twentieth-century culture, Duden follows the process by which the pregnant woman’s flesh has been peeled away to uncover scientific data. Lennart Nilsson’s now-famous photographs of the embryo published in Life magazine in the mid-1960s stand in stark contrast to representations of the invisible unborn in medieval iconography or sixteenth-century painting. Illumination has given way to illustration, ideogram to facsimile, the contemplative intuition of the body to a scientific analysis of its component parts.

New ways of seeing the body produce new ways of experiencing the body. Because technology allows us to penetrate that once secret enclosure of the womb, the image of the fetus, exposed to public gaze, has eclipsed that of woman in the public mind. Society, anxious about the health of the global environment, has focused on protecting “life” in the maternal ecosystem, in effect, pitting fetus against mother.

Duden’s reading of the body lends a unique historical and philosophical perspective to contemporary debate over fetal rights, reproductive technologies, abortion, and the right to privacy. This provocative work should reinvigorate that debate by calling into question contemporary certainties and the policies and programs they serve to justify.