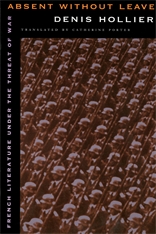 French Literature under the Threat of War

“[A] fine collection of essays…which are forceful and ingenious in argument and substantive in effect. The themes are broadly political and the writers that [Hollier] attends to are from the late 1930s and the 40s… Where [he] succeeds is in gathering the scattered and sometimes ambiguous evidence of dialectical tension in the writers he is involved with here—Sartre, Leiris, Roger Caillois, Bataille, Malraux.”—John Sturrock, Times Literary Supplement

“In his examination of five writers, Hollier reveals how the self-inflicted and self-willed ‘depersonalization’ that these writers promote in their work allows it to be subsumed by a mythical dimension, which in turn can lead to an irresponsible abandonment of the self and the individual in favour of a totalitarian environment. Such writers indulge in ‘self-mutilation’ because they commit themselves to writing on behalf of a kind of world from which they would be excluded… These wide-ranging essays contain new insights and analyses of works that are generally not very well known, so that, for this reason alone, anyone interested in the social, cultural, political, or literary issues of this period will find them worth consulting.”—Peter Tame, Modern & Contemporary France [UK]

“Proposing his book as a ‘prehistory of postmodernism,’ Hollier considers the theoretical writings of a group of novelist/critics during the interwar years—George Bataille, Michel Leiris, Roger Caillois, Andre Malraux, and the early Jean-Paul Sartre. The book documents the self-consciousness that characterizes these writers as they theorize about the possibility of writing a novel in the years leading up to WWII. Perhaps unwittingly, the author demonstrates that the authorial narcissism and self-absorption that have crippled the French novel over the past 35 years have their roots in these interwar years. Students of French literature who are interested in minor and marginal literary groups and movements of the 1930s will find interesting information in this study.”—D. O’Connell, Choice