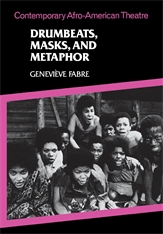 Contemporary Afro-American theatre is an exciting spectacle of an emerging black identity during a period when blacks have come to the forefront of political activity in the United States. Geneviève Fabre brings us the vast and rich production of black drama since 1945, placing it in historical and cultural context as a platform for political statement. Two strains emerge: the militant theatre of protest, and the ethnic theatre of black experience.

Militant theatre breaks free from dominant white traditions and seeks to mobilize members of the community into common action. Masks and metaphors assume their fullest meaning: when the “white masks” are torn off, “black skins” suddenly appear. At first a shout of anger and of challenge, the militant theatre later becomes an almost visionary world. The Pike of LeRoi Jones/Amiri Baraka rise like clenched fists. Among the other dramatists of militant theatre are Douglas Turner Ward, Ted Shine, Ben Caldwell, and Sonia Sanchez. We see their plays that examine relations between blacks and whites; stories of victims and rebels and traitors; and rituals of vengeance.

In contrast to the didactic speech of the militant theatre, the theatre of experience develops out of a dialogue in the language of blacks about their own experience. It embraces the rituals of daily life: the liturgy of the black church, traditional music, and folklore. This theatre celebrates a vital culture existing outside the boundaries of the dominant society. We hear the voice of the blues and the rhetoric of religion, we see depictions of the family and the street world of the ghetto, as well as the time–honored art of the trickster. James Baldwin, Ed Bullins, Melvin Van Peebles, and Edgar White are among the playwrights shown making extensive use of black cultural traditions.

Fabre is the first to attempt such an ambitious assessment of contemporary black theatre, one that evaluates its development as well as individual authors, plays, and performances, and also defines the growth of a distinctive and thriving theatrical tradition.