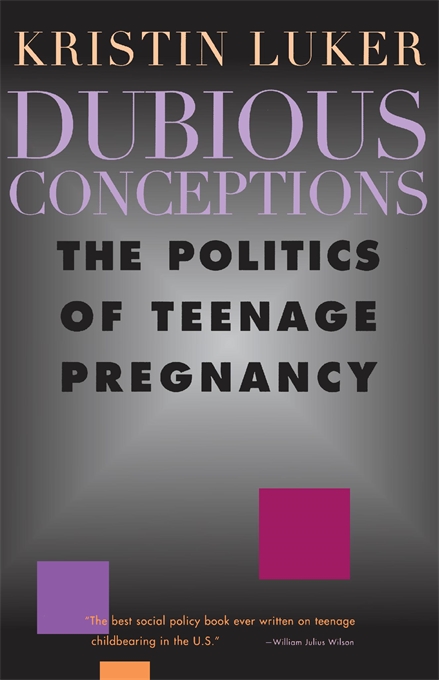 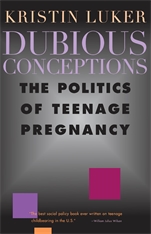 The Politics of Teenage Pregnancy

“A very important work… Luker makes a compelling case that the familiar portrait [of teen-age mothers] we have been shown so often is the reflection of a public mood rather than a demographic reality… It has always been the case that our national problem is not teen-age childbirth or single-parent families but poverty itself… To continue to insist otherwise after publication of this wise, thoughtful book is to be either obdurately ill informed or ruthlessly ideological in the face of compelling evidence to the contrary.”—Kai Erikson, New York Times Book Review

“[A] stunning new account of how both liberals and conservatives ‘constructed’ an epidemic of teenage pregnancy. Luker’s meticulous research challenges the myth of an epidemic and concludes that it is poverty that causes teenage pregnancy and not the reverse.”—Ruth Rosen, Los Angeles Times

“In the country I’d like to live in, the publication of Dubious Conceptions would be a transformative event. The book would dissolve prejudices and stimulate informed, positive public policies improving the lives—and lowering the birth rates—of thousands of poor, young, unmarried girls and women. In Dubious Conceptions, Kristin Luker’s treatment of the subject of youthful single pregnancy is lucid, orderly, and heartfelt… [It] makes a strong presentation for several reasons, including, first of all, that it addresses and thoroughly undermines the most popular, seductive, and intractable myths associated with teen pregnancy: that ‘teen mothers’ and ‘welfare mothers’ are congruent categories, and that teenage pregnancy causes and perpetuates poverty in the United States.”—Rickie Solinger, Contemporary Sociology

“[A] provocative critique of public thinking on early pregnancy and childbearing… Drawing on historical and social scientific evidence, [Luker] shows how both economic and cultural forces have contributed to the problems associated with early childbearing.”—Barbara Dafoe Whitehead, Commonweal

“Kristin Luker’s new book offers a clearly written, much-needed survey of the recent academic literature on teenage motherhood, as well as an insightful overview of historical attitudes toward early childbearing and single mothers.”—Kim Phillips, In These Times

“Dubious Conceptions is an extremely readable, interesting treatise on the history of adolescent sexuality in the United States and the genesis of the politicization of teenage pregnancy.”—Elizabeth M. Alderman, M.D., Journal of the American Medical Association

“This is a book of immense scholarship which is also a compelling and accessible read. Luker examines the current social policy obsession with the ‘problem’ of teenage pregnancy within the U.S.… Introducing the stories of many young women who have been…demonized, Luker sensitively and sympathetically explores the realities of their lives. She shows that welfare reform and family policy should take account of the realities of life for women on the margins, and not seek to blame and punish them for society’s ills.”—Race Relations Abstracts

“[An] insightful, scholarly, and wonderfully readable analysis of Americans’ misconceptions about teenage pregnancy and the impact of these beliefs on public policy… [Luker’s] fresh perspective on the issue of teenage pregnancy is an important contribution to the current debate over welfare reform. Commonsensical, timely, and very persuasive.”—Kirkus Reviews

“This thoughtful and well-written book reveals more clearly than any previous publication the extent of our misunderstanding of the problem of teen pregnancy. Dubious Conceptions provides the basis for a new and constructive national dialogue on the subject. It is by far the best social-policy book ever written on teenage childbearing in the United States.”—William Julius Wilson, Harvard University