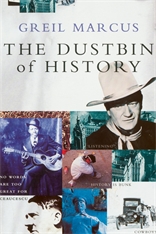 The Dustbin of History

“As a seemingly inexhaustible stream of right-wing apologists, self-help writers, pundits, and trendwatchers serve as poor excuses for intellectuals, Marcus is the real thing: a man engaged with culture as a deeply woven fabric.”—Ann Powers, The Village Voice

“Marcus never ceases to be fully human or an American; he can sometimes write with a bizarrely North American earnestness, but he also shows a strong and perhaps more surprising vein of almost Orwellian decency.”—Phil Baker, The Times Literary Supplement

“The true sequel to Greil Marcus’s historic Mystery Train… [This book] carries through not the theme but the promise of his earlier book… Being able to see the history of the human species scraped onto the wall of a cave ultimately does connect with being able to hear the history of a society engraved in the black vinyl grooves of a 45, and Marcus knows this.”—Dave Marsh, City Pages

“Not many critics quote Leon Trotsky in one breath and the Sex Pistols in the next, which is why Greil Marcus occupies such a special niche in American culture… Marcus writes with clarity and warmth… The Dustbin of History reminds us that criticism at its best is a generous act of faith, not a judgmental dressing-down.”—Wendy Smith, The Cleveland Plain Dealer

“Another significant step in an important critic’s reading of American culture, an assertion that history can be found embedded in fleeting moments of music, movies and all the fragments of mass culture.”—John Doyle, The Globe & Mail

“For Marcus, real history equals pop culture; that is, real history is the moment when everything is at stake and nothing is resolved… There’s plenty to argue about in his understanding of history. As to his insights into pop culture, he’s one of the best in the field. His essays are a delight to read—which is, unfortunately, more than one can say about most historians.”—Aaron Howard, The Jewish Herald-Voice

“Marcus knows no academic bounds to what he feels entitled to comment upon. Books, films, art ancient and modern, all fall into his sights… He writes with the trenchancy, even urgency, of a man on a mission.”—Mat Snow, Mojo

“Marcus finds in Hannah Arendt’s words a chilling warning: ‘Once a specific crime has appeared for the first time, its reappearance is more likely than its emergence could ever have been.’ Possibility, then, is a two-way street. If jack boots goosestepped down the Champs Elysees once, they could do it again. Thus the dustbin swells into a mass grave.”—Sarah Vowell, New Art Examiner

“At his best, his writing leaves you slightly out of breath, moving along from point to point so it’s hard to put the book down even when you finish an essay.”—Amy Holberg, Puncture

“Greil Marcus is one of the most accomplished commentators on popular culture writing today… This collection of pieces written over the past two decades for such journals as Rolling Stone and The Village Voice can serve as an excellent introduction to Marcus’ distinctive role as a critic, uncovering the byways of culture that often escape the eyes of academics.”—Virginia Quarterly Review

“I have never read The Wind Chill Factor, and probably never will, but what is most valuable about Marcus is that he can redeem it, pull it back from the dustbin, or from that purgatory of the printed word—the secondhand bookstore. Redemption in Marcus’s view of history means the rejoining of the conversation.”—McKenzie Wark, World Art

“Marcus is a little like the guys who, in my father’s childhood, hawked decoder rings on the radio. Only what he’s selling is no gyp. In his review of American Hot Wax, he says the movie makes ordinary life seem no longer ordinary: ‘It seems like a gift.’ After reading Marcus, you’re ready to seek out the meanings lurking in newspaper reports, pop songs, the language of politicians, movies so familiar their content seems exhausted. An ordinary life no longer seems ordinary. It seems like an adventure.”—Charles Taylor, The Boston Phoenix

“This book could just as easily be called The Theft of History. Even being a witness to events is no longer a guarantee of their permanence. In the course of my recent interrogations, I found that Greil Marcus’s words were quoted to me as often as those of the subjects of his essays. But once you have enough words in circulation, somebody will come along to use them to trip you up.”—Elvis Costello

“Marcus has abilities which I’ve always thought of as characteristic of the best critics of the great New York School: he embeds the works of art he discusses in a wonderfully vivid recreation of the cultures that produced them. As a historian he succeeds again and again shows how a speech, an exhibit, a song, or a movie, seen in context but not reduced to context, offers us either the history we didn’t get to live or the history we couldn’t avoid—and does so better than a library of supposedly higher art forms.”—Anthony Grafton, author of New Worlds, Ancient Texts