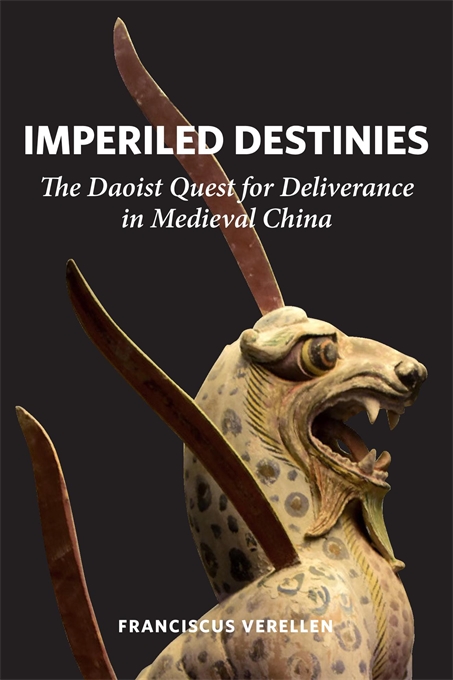 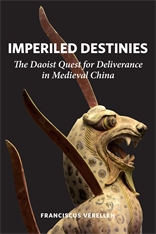 The Daoist Quest for Deliverance in Medieval China

“With its combination of breadth in scope and depth of analysis that only a senior scholar such as Verellen could achieve, Imperiled Destinies is an important contribution to the study of Daoism.”—Joshua Capitanio, Journal of the American Academy of Religion

“Imperiled Destinies substantially enlarges our understanding of the Chinese-speaking world of the first millennium CE and of the importance of the Daoist religious tradition in everyday life. Franciscus Verellen illuminates the perspective of lay adherents of the tradition, and it is their hopes and fears that are in the foreground. Deft comparisons with their Chinese Buddhist contemporaries, and with the development of Christianity in Europe, show how the Daoist tradition too was able to attract its own widespread support by addressing the human condition. This is a book that deserves to be very widely read.”—T. H. Barrett, Professor Emeritus of East Asian History, SOAS, University of London

“In Imperiled Destinies, Franciscus Verellen explores the shifting terrain of medieval Daoist views of and responses to human sin, vulnerability, and perfectibility. His meticulous research and enticing narration illumine the roles Daoism enacted in Chinese society, its relations to Buddhism and Confucianism, and its integration into the hopes and fears of the medieval populace.”—Stephen R. Bokenkamp, Regents’ Professor, School of International Letters and Cultures, Arizona State University

“Franciscus Verellen offers a compelling portrait of the soul of medieval China—a psyche burdened by debt and obligation that can only be released through ritual and sacrifice. Drawing on an impressive scope of texts and liturgies, he introduces us to, among others, a general afflicted with eye ailments, a woman trying to rescue her husband and son, and a senior leader grieving for his parents. Although all these people seek answers in the world of spirits, gods, and the restless dead, their stories are universal and contemporary, and help us better understand the traditions that are being resurrected today as a way to give shape and meaning to life in 21st-century China.”—Ian Johnson, Pulitzer Prize–winning author of The Souls of China: The Return of Religion after Mao

“Based on decades of engagement with the primary scriptures of early Daoism, Franciscus Verellen’s pathbreaking new book goes straight to the ethical core of Daoism, exploring how Daoists dealt with the burden of sin, both their own and that of their ancestors, and sought salvation through ritual and confession. The third section, on developments during the Tang dynasty, gives us a new understanding of a key, understudied period that laid the foundation for late imperial and modern Daoism.”—Terry Kleeman, Professor of Chinese and Religious Studies, University of Colorado

“A truly outstanding study of medieval Daoist conceptions of redemption. Verellen beautifully explores the key metaphors and images that lay behind medieval Daoist notions of life and destiny, as well as the changing rituals aimed at achieving deliverance. This is an invaluable work that adds a new dimension to our understanding of Chinese religions.”—Michael Puett, Walter C. Klein Professor of Chinese History and Anthropology, Harvard University

“An outstanding historian of Daoism, Franciscus Verellen has given us here the first comprehensive study of China’s high religion during its formative phases. This pioneering achievement brings our in-depth understanding of Daoism on par with that of other world religions and makes it an important resource for comparative research.”—Kristofer Schipper, Royal Academy of the Netherlands

“Magnificently conceived, this elegant book shuttles effortlessly between medieval China and Late Antiquity in the Mediterranean world. A capstone of Daoist studies of the past half-century, Franciscus Verellen’s opus articulates the big picture, explaining the most important transformations in ritual and philosophy from the second to the tenth centuries.”—Stephen F. Teiser, D. T. Suzuki Professor in Buddhist Studies and Professor of Religion, Princeton University