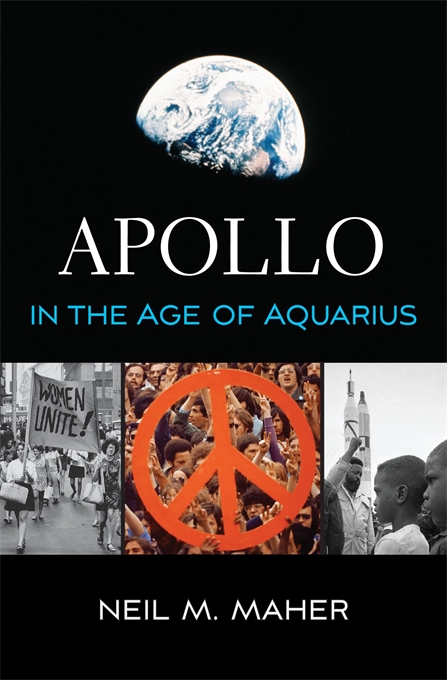 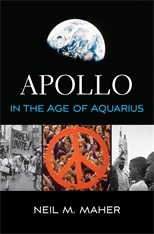 Apollo in the Age of Aquarius

“Neil M. Maher’s Apollo in the Age of Aquarius succeeds admirably in weaving a seamless web of technological, economic, political, social and cultural strands and their multiple, intended and unintended consequences.”—Zaheer Baber, The Times Literary Supplement

“I very much enjoyed this book. Think of it as a substance-rich, original on every page exploration of how the space program interacted with the environmental movement, and also with the peace and ‘Whole Earth’ movements of the 1960s. Most of all it is a social history of technology.”—Tyler Cowen, Marginal Revolution

“On 20 July 1969, men landed on the Moon; back on Earth, the United States was gripped by sociopolitical convulsions. NASA and Woodstock may now seem polarized, but in this illuminating, original chronicle, historian Neil Maher traces multiple crosscurrents between them. The impact of the ‘Blue Marble’ image of Earth on environmental policy is famous. Less so is how the costs of the Apollo program enraged inner-city activists—and how NASA duly deployed a crack team of aeronautics experts to solve practical housing issues for poor African Americans.”—Barbara Kiser, Nature

“In Apollo in the Age of Aquarius, Maher frames a meticulously researched story of NASA’s interaction with the social and political movements of the ’60s… A reader with an interest in NASA history will find a new perspective in this book with a focus on the space program’s interactions with the civil rights movement, the women’s movement, environmentalists, and the counterculture. Those with an interest in the cultural history of the ’60s will find an even more rewarding read, as Maher offers depth and breadth in his writing.”—Linda Levitt, PopMatters

“Maher contrasts the culture of the 1960–70s NASA leadership and its focus on the space race with counterculture leaders’ focus on the issues of poverty, housing, war, nature and environment, and sexism and feminism… [An] excellent work.”—K. D. Winward, Choice

“Maher takes two well-known stories of the long 1960s—the space race and grassroots political activism—and combines them into a new and thought-provoking history. He skillfully demonstrates that man’s quest to reach the moon had unintended earthly effects as ideas about space exploration, resources, and technology collided in unexpected ways with local activism and emerging ideas about the planet. Anyone interested in the space race, the turbulent social politics of the 1960s, and changing ideas about nature and the environment should read this book.”—Gretchen Heefner, author of The Missile Next Door: The Minuteman in the American Heartland

“Neil Maher offers an outstandingly novel work on the conflicting political and cultural currents that swirled around NASA in the 1960s and the 1970s. Apollo in the Age of Aquarius is a landmark in space history, a paradigm shift that will hopefully inspire a new generation to think and write differently about the nation’s major technological achievements.”—John Krige, author of Sharing Knowledge, Shaping Europe: US Technological Collaboration and Nonproliferation

“A major work from a fine writer. Maher is the first to explore how the space race intersected with the era’s political, social, and cultural movements.”—Adam Rome, author of The Genius of Earth Day: How a 1970 Teach-In Unexpectedly Made the First Green Generation

“As a child in the 1960s, I was aware of both NASA’s achievements and social unrest, but unaware of the clashes between those two historical currents. Maher does yeoman work in capturing the maelstrom of the 1960s and 1970s intersecting with NASA’s program for human spaceflight.”—George Zamka, Colonel USMC (Ret.) and former NASA astronaut