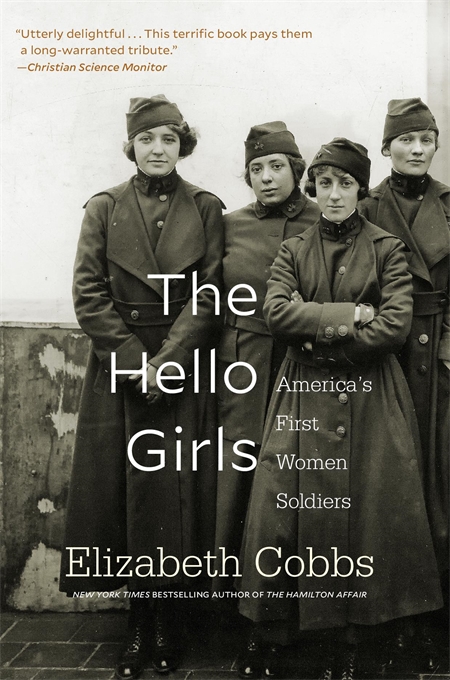 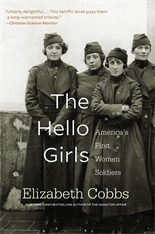 “This engaging history crackles with admiration for the women who served in the U.S. Army Signal Corps during the First World War, becoming the country’s first female soldiers. Operating switchboards in France, they juggled constantly shifting lists of codes and connections, worked fast amid artillery blasts, and mastered the ‘genteel diplomacy’ needed to communicate with officials in French as well as English. Their technical skill was matched by what one woman called the ‘great, unquenchable, patriotic desire to do my bit.’ Cobbs intercuts front-line activities with political battles on the home front: the women returned from victory to an America that did not yet grant them the right to vote.”—New Yorker

“Utterly delightful… It’s a little-known side-story of the war, but it’s not a little story: In Cobbs’s skillful handling, it becomes a big, multilayered tale of courage and long-delayed justice… Cobbs very adroitly weaves the story of the Signal Corps into that larger story of American women fighting for the right to vote, but it’s the warm, fascinating job she does bringing her cast of The Hello Girls to life that gives this book its memorable charisma… [These women] fought for years to gain the recognition they deserved as the forerunners of all women serving in the U.S. armed forces. This terrific book pays them a long-warranted tribute.”—Steve Donoghue, Christian Science Monitor

“In the crisply written The Hello Girls: America’s First Women Soldiers, Elizabeth Cobbs details exactly what was asked of these women during the war, and reveals, with an authoritative, dispassionate, this-was-some-self-evident-nonsense lucidity, the dismaying extent to which their country failed them when it was over… Smartly, she also walks us through the sundry and simultaneous technical demands of switchboard operating, noting that women could connect five calls in the time it took a man to complete one. Cobbs is particularly good at spotlighting how closely the service of military women like the Hello Girls was tied to the success of the suffrage movement.”—Glen Weldon, NPR Books

“Elizabeth Cobbs draws on a range of official documents, as well as letters and diaries, to tell the fascinating story of the forgotten women telephone operators who were a critical part of the war effort… The Hello Girls makes vividly visible a group of women who, until now, have been unjustly hidden.”—June Purvis, Times Higher Education

“Cobbs shines a spotlight on the unique contributions of a group of remarkable American women, in the spirit of Hidden Figures (2016), in a book that belongs in every American-history collection.”—Carolyn Mulac, Booklist

“In an informative history of women’s military work, Cobbs focuses on more than 200 telephone operators who supported combat soldiers in Europe soon after the United States entered the war in 1917… A fresh, well-researched contribution to military and gender history.”—Kirkus Reviews

“Cobbs shines a new light on the history of suffrage and women’s rights in the United States, using as a lens the servicewomen enlisted in the U.S. Army Signal Corps during World War I… Cobbs weaves the trials and triumphs of America’s first female soldiers (although they wouldn’t win the right to claim that distinction until 1979) with the fight for women’s rights and the rising waves of feminism.”—Chad E. Statler, Library Journal (starred review)

“What an eye-opener! The Hello Girls tells the lost story of the women who braved the war in Europe to provide essential communications between U.S. commanders and fighters in the field. Cobbs unearths the original letters and diaries of these forgotten heroines and weaves them into a fascinating narrative with energy and zest.”—Cokie Roberts, author of Capital Dames: The Civil War and the Women of Washington, 1848–1868

“Writing with panache and acumen, Cobbs tells the colorful story of the women who served in the Army’s Signal Corps in World War I, while opening fresh perspectives on communications technology, the nature of modern warfare, the nation’s treatment of veterans, and the never-ending struggle of women for their full rights as citizens. The Hello Girls turns a good tale into a great tool for understanding some of history’s grandest themes.”—David M. Kennedy, author of Over Here: The First World War and American Society

“This splendidly written book reveals the bravery and grit of the nation’s first women soldiers. During World War I, they were deployed to France, only to be denied recognition as veterans upon return. Their remarkable stories come alive in Cobbs’s wonderfully absorbing narrative as does the world of contradictions in which they lived and served.”—Ellen Fitzpatrick, author of The Highest Glass Ceiling: Women’s Quest for the American Presidency