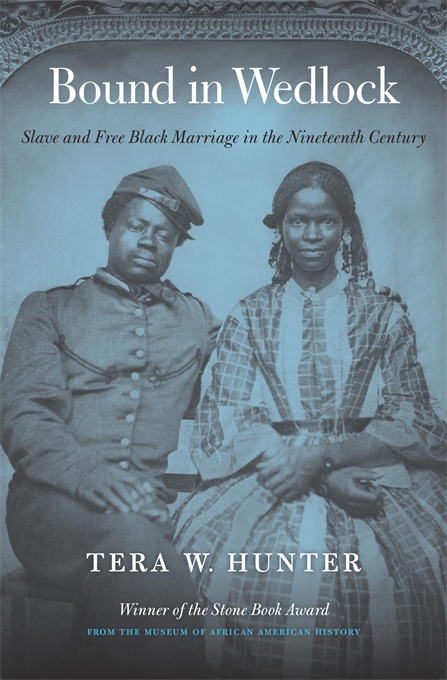 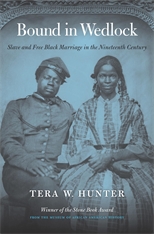 Slave and Free Black Marriage in the Nineteenth Century

“Hunter lets us hear the unheard stories of love and marriage among the enslaved.”—Geraldine Brooks, New York Times Book Review

“[A] remarkable book… Her powerful, meticulously researched book describes how the grinding demands of slavery, white standards of marriage and the steady retreat from the qualified gains of the Civil War not only posed abiding challenges to African-American families but also inspired in them a tenacious commitment to marriage… Through careful use of difficult legal sources and close reading of slave narratives, ex-slave interviews, government agency reports, congressional debates, pension records and church minutes, Hunter gives resonant voice to the often illiterate people she studies… Hunter has harvested stories of human resilience from the cruelest of soils. Bound in Wedlock is an impeccably crafted testament to the African-Americans whose ingenuity, steadfast love and hard-nosed determination protected black family life under the most trying of circumstances.”—Mark M. Smith, Wall Street Journal

“Dazzling… Hunter nudges the rich and raucous historiography on black marriage and black kinship in a new direction… Hunter’s powerfully written social history calls our attention to a world that was lost in the transition from slavery to freedom. Far from a ‘tangle of pathology,’ the history of black intimate relationships Hunter captures in Bound in Wedlock illuminates the relentless efforts of those African Americans who, even in the face of overwhelming obstacles and oppression, shaped their intimate connections on their own terms and fought for a vision of marriage that could survive both slavery and freedom.”—Robert D. Bland, H-Net Reviews

“The unprecedented first comprehensive history of African American marriage in the nineteenth century… In this brilliantly researched book, Hunter examines the experiences of slave marriages as well as the marriages of free blacks. She also looks at the ways in which married couples rejected the Christian ideals of marriage.”—Vibe

“An important and comprehensive work that is worth reading by all, especially those interested in the affects of slavery on society today.”—Amy Lewontin, Library Journal (starred review)

“In this extraordinary book, Tera Hunter builds on vast research to discern the resilient marriage forms that African Americans devised during the nineteenth century to cope with the havoc of bondage, the fleeting promise of emancipation, and the fresh compulsions that came with freedom. Written with eloquence, teeming with evidence, comprehensive in its sweep, challenging in its conclusions, Bound in Wedlock is a momentous achievement.”—Sydney Nathans, author of A Mind to Stay: White Plantation, Black Homeland

“Tera Hunter’s fascinating and intensive assessment of slave and free marriages in the nineteenth century details powerfully both the supreme importance of kinship relations and the complex ways that the persistence of post–Civil War white supremacy vexed and hampered African American family integrity even more directly than legacies of slavery did.”—Nancy F. Cott, author of Public Vows: A History of Marriage and the Nation

“Bound in Wedlock is a groundbreaking history that challenges the belief that the crisis of black marital and familial relations can be traced directly to slavery. With a vast arsenal of archival evidence, Hunter illuminates the complex and flexible character of black intimacy and kinship and the precariousness of marriage in the context of racial and economic inequality. It is a brilliant book and one destined to invite vigorous debate.”—Saidiya Hartman, author of Lose Your Mother: A Journey Along the Atlantic Slave Route

“Bound in Wedlock demonstrates that the history of African American marriage is far more than a legacy of slavery. Instead, it is a story at once rooted in a distinctive collective experience, intensely personal, and at the same time bound up in the legal, social, and cultural transformations that re-made marriage for all Americans. Wide-ranging, learned, and deeply researched, it is a splendid accomplishment.”—Dylan C. Penningroth, University of California, Berkeley, and the American Bar Foundation