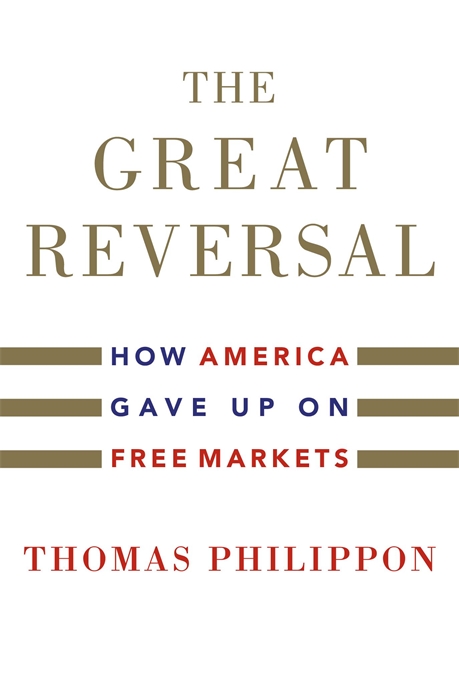 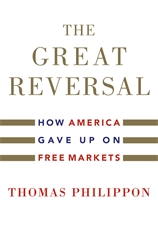 “[A] superbly argued and important book. America is no longer the home of the free-market economy… The great obstacle to action in the U.S. is the pervasive role of money in politics. The results are the twin evils of oligopoly and oligarchy… Donald Trump is in so many ways a product of the defective capitalism described in The Great Reversal. What the U.S. needs, instead, is another Teddy Roosevelt and his energetic trust-busting. Is that still imaginable? All believers in the virtues of competitive capitalism must hope so.”—Martin Wolf, Financial Times

“A fascinating case study of rising corporate concentration and why this reflects not just impersonal economic forces but political choices… [Philippon] concludes competition has indeed declined to the detriment of consumers. His novel contribution, though, is to contrast this with the experience of Europe… Where the U.S. was once the world’s teacher, it may be time to be the pupil.”—Greg Ip, Wall Street Journal

“Fascinating… In one industry after another, [Philippon] writes, a few companies have grown so large that they have the power to keep prices high and wages low. It’s great for those corporations—and bad for almost everyone else… Too often, both parties are still confusing the interests of big business with the national interest. And American families are paying the price.”—David Leonhardt, New York Times

“Philippon sees today’s Europe, ironically the home of government-driven market intervention, as the place that has figured out how to set markets free by spurring competitiveness and thus keeping services up and prices down… The Great Reversal argues that the United States has much to gain by reforming how domestic markets work but also much to regain—a vitality that has been lost since the Reagan years. We don’t know if Philippon is a fan of Donald Trump, but his analysis points to one way of making America great again: restoring our free-market competitiveness.”—Arthur Herman, Wall Street Journal

“[A] primer on the recent woes of the U.S. economy… It attributes these troubling developments to a decline in competition that has been brought about in large part by the rise of very powerful technology companies and above all by the lack of enforcement of antitrust policies. Philippon also points to the damaging role of politicians who protect the interests of their wealthy donors by sponsoring and creating loopholes in tax and regulatory laws.”—Richard N. Cooper, Foreign Affairs

“Examines money in politics, and carefully knocks down tendentious arguments that such behavior does not simply reflect the rich purchasing policy outcomes that benefit themselves… Some of Philippon’s findings are eye-popping.”—Ryan Cooper, American Prospect

“In this seminal book, economist Philippon uses detailed evidence to argue that, far from being the home of free-market competition, the U.S. today has less competition than the much-maligned EU, particularly in its product markets, which are riddled with monopoly and monopsony. This is not the result of natural forces, but of deliberate policy. Declining competition has raised profits, depressed wages, weakened investment and undermined productivity growth. The U.S. needs a reinvigoration of antitrust.”—Financial Times

“A timely diagnosis of what fundamentally ails the American economy. Philippon, using solid empirical evidence and careful research, asserts that the level of competition has declined in the U.S.”—Vivekanand Jayakumar, The Hill

“Philippon argues for a surprising conclusion: Europe is making a better job of running a competitive market economy than the home of capitalism… Time also, Philippon argues, for America to relearn the virtues of competitive capitalism from its erstwhile pupil across the pond.”—Colm McCarthy, Irish Times

“Provides an in-depth, evidence-based examination of how unchecked corporate power harms workers, consumers, and the economy, all while making a passionate case in favor of competitive markets.”—ProMarket

“A compelling read for those interested in the dynamics of the overall innovation economy or the political debate over antitrust and Big Tech… A timely analysis of the weakening of America’s regulatory regime for protecting free market competition.”—Eric Peckham, TechCrunch

“Everyone in tech or interested in tech ought to read this book—it provides a rigorous, but easy-to-grasp look at the economics of consolidation and what it does to markets, prices, and products.”—Nilay Patel, The Verge

“Should we love American capitalism, or hate it? Are large corporations making our lives better through endless innovation and price reductions, or are they exploiting their workers and their customers to enrich the few? Would European-style regulation make things better, or worse? Thomas Philippon’s eloquent book has the answers. It is an invaluable contribution to one of today’s most important debates.”—Angus Deaton, Nobel Laureate in Economic Sciences

“The Great Reversal is a must-read for anyone who cares about the single most important issue of our time—the growing concentration of economic and political power in the hands of too few corporations and individuals. Philippon shows us that America is no longer the home of free markets, and Old Europe is a lot more competitive than we think. Data-driven, readable economic myth-busting at its best.”—Rana Foroohar, Associate Editor and Global Business Columnist, Financial Times

“In this hugely important book, Thomas Philippon shows that America’s most urgent economic problem is not too much capitalism, but rather too little competition. A clarifying guide to the political reforms we need to make the market work for ordinary people.”—Yascha Mounk, author of The People vs. Democracy: Why Our Freedom Is in Danger and How to Save It

“Superbly exposited and replete with examples, this marvelous book illustrates the challenges the United States faces today in reversing its decades-long slide into monopoly and economic oligarchy. A master class in political economy, it draws on the author’s own pathbreaking academic research, yet shows great respect for competing points of view. Philippon’s quantitative contrast between highly monopolized U.S. markets and highly competitive European markets is particularly striking. The data suggests that Americans should not be so complacent about their apparent economic superiority.”—Kenneth Rogoff, Harvard University

“The Great Reversal is a terrific book that tackles a hot, policy-relevant, and fascinating question: what has happened to competition in the United States? It’s essential reading to understand twenty-first-century capitalism.”—Gabriel Zucman, University of California, Berkeley