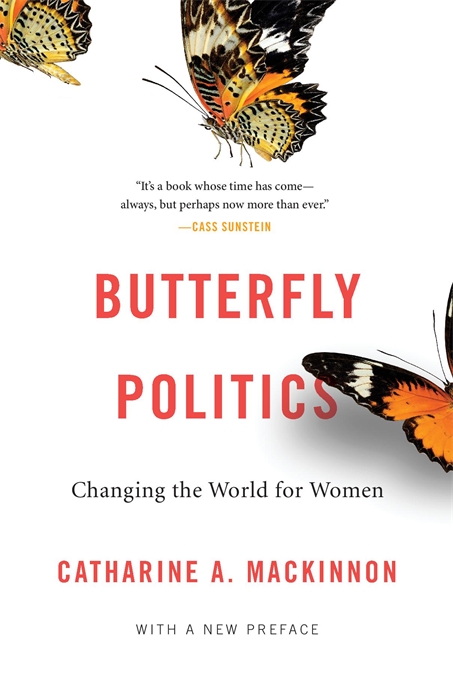 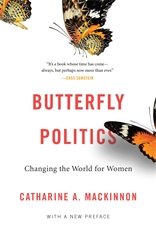 Changing the World for Women, With a New Preface

“MacKinnon [is] radical, passionate, incorruptible and a beautiful literary stylist… Butterfly Politics…is a devastating salvo fired in the gender wars. A fierce and lucid anthology of essays on subjects ranging from torture to pornography, this book has a single overriding aim: to effect global change in the pursuit of equality… Butterfly Politics is her call for humanity to rise to its feet.”—Antonella Gambotto-Burke, The Australian

“What comes together here—and what is fascinating about all of MacKinnon’s work—is a deep respect for aspects of the conventional world (the law, the value of scholarship) and an equally profound fury at the way in which these aspects also uphold many of the assumptions about the world that she takes to task. In this, it could be said, she is not unlike many of us. All respect to her for trying to find a way through this maze.”—Mary Evans, Times Higher Education

“Small actions can have highly complex and large impacts, and Catharine MacKinnon uses this concept, the ‘butterfly effect,’ to explain how critical interventions can produce radical transformation in the gender system. She exposes through 40 years of her legal battles an emerging global normative system confronting sexual inequality… MacKinnon is a 21st-century thinker, one of the few proposing global software that could run on the old national hardware. She is encouraging multidimensional political thinking, precise engagement, principled creativity, imagination, instinct and adaptability: small actions in a collective context producing systemic changes.”—Luis Moreno Ocampo, Lawfare

“[MacKinnon’s] theoretical understanding of concepts of power, privilege and intellectual freedom isn’t just universal, but also prophetic in the ways it holds weight in 2018… The book offers a comprehensive understanding of MacKinnon’s legal scholarship through over four decades. Her work asks tough questions, and clearly set some theoretical precedents in our modern-day, Tumblr and ‘social justice warrior’ era understanding of sexism, power dynamics and inequality.”—Sabah Azaad, The Print

“This excellent collection of MacKinnon’s speeches and other writings covers a roughly 40-year period and shows the process of attempting to hammer law into a tool that could be used for social change to address the inequality of women. This was something of a tall order, given, as MacKinnon says, ‘The legal system that we have was not designed by women or so that women could make it work for women.’ Yet here she is, doing it, and the book provides a rare and quite intimate window on how it is done, in both theory and practice.”—Michele Dauber, Stanford Law School

“MacKinnon adapts a concept from chaos theory in which the tiny motion of a butterfly’s wings can trigger a tornado half a world away. Under the right conditions, she posits, small actions can produce major social transformations.”—The New York Times

“Sometimes ideas change the world. Catharine MacKinnon is a visionary, and this astonishing, miraculous, shattering, inspiring book captures the origins and the arc of the movement for sex equality. It’s a book whose time has come—always, but perhaps now more than ever.”—Cass R. Sunstein, Robert Walmsley University Professor, Harvard Law School, and former Administrator, White House Office of Information and Regulatory Affairs