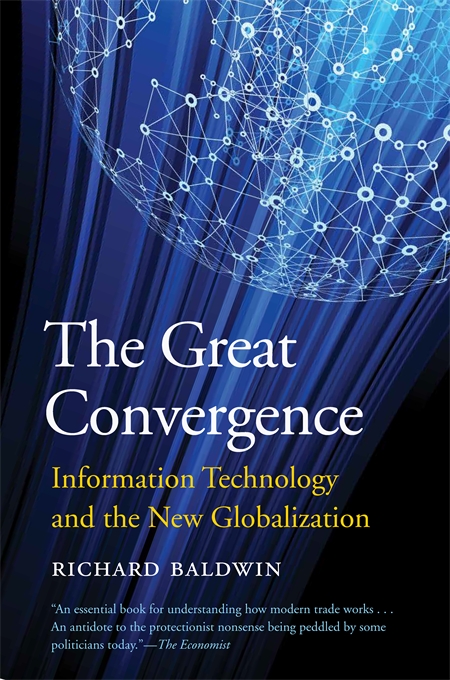 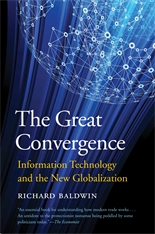 “An essential book for understanding how modern trade works via global supply chains. An antidote to the protectionist nonsense being peddled by some politicians today.”—The Economist

“[An] excellent book… Baldwin’s work seems likely to become a standard, perhaps indispensable, guide to understanding how globalization has got us here and where it is likely to take us next. There can be few more vital subjects today that will benefit from this sort of clear and comprehensive exposition.”—Alan Beattie, Financial Times

“Will surprise and illumine.”—Paul Collier, The Times Literary Supplement

“There is much in this book to ponder.”—Tyler Cowen, Marginal Revolution

“Sheds a bright light on the nature of trade in today’s era—the ‘second globalization’ since the industrial revolution.”—Martin Wolf, Financial Times [11/23/16]

“In this brilliant book, Baldwin has succeeded in saying something both new and true about globalization.”—Martin Wolf, Financial Times [12/02/16]

“In this congenial volume, [Baldwin] adroitly covers 200,000 years of human trading practices, deploying insights from archaeology, anthropology, climate science, economic history, political science, development studies and other disciplines as he goes. He takes us on a journey from the ancient world to the 21st century, and from the global North to the developing South, in order to set the scene for the past 25 years of globalization.”—Juliet Webster, Times Higher Education

“Offers a valuable summary of how we got to where we are now. It’s a narrative that bears retelling.”—Jane Humphries, Times Literary Supplement

“Baldwin’s work is fascinating… The Great Convergence is set to become a canonical text within the field.”—The Bookbag

“If the corrosive events of the [presidential election] in America are anything to go by, economist Richard Baldwin is absolutely, stunningly (yet unfortunately) correct. That said, this book does endeavor to change the way we think about globalization—rather than the future of humanity.”—David Marx, David Marx Book Reviews

“The Great Convergence offers a compelling framework for thinking about how trade is organized and why and how it benefits whom… I can’t imagine a better and more accessible analysis of trade and globalization in the digital era.”—Diane Coyle, The Enlightened Economist

“The first part of this book offers a breathtaking overview of the four phases of globalization that Baldwin argues have taken place during the past 200,000 years.”—G. John Ikenberry, Foreign Affairs

“In this deft treatise, economist Richard Baldwin argues that we are seeing a third wave [of economic globalization]… The first two waves of globalization were boons for all. The third, Baldwin argues, is working mainly to the advantage of intellectual-property owners in developed countries, and of emerging markets able to access productive global value chains.”—Brad DeLong, Nature

“Shows how the global production system has moved from trade in goods and services to trade in information, with multinational corporations obsessively trying to prevent intellectual-property leaks to competitors. Baldwin’s analysis has important implications for both the governance of global trade and domestic policymaking.”—Erik Berglöf, Project Syndicate

“[Baldwin] doesn’t simply deliver an excellent summary of the history of globalization with The Great Convergence. He also describes how it has changed over the last century, and how thanks to the digital revolution we stand on the threshold of a new age in the evolution of the global economy… Picking up Baldwin’s book is like stepping into an economic time machine. How did the west become the dominant economic center of the world in just two centuries, generating 70 percent of global economic output? Why did this trend start to change around 1990? And why are supply chains, not national borders, the deciding factors for globalization today? Only after these questions are answered can Donald Trump’s protectionist counterrevolution be unmasked as the illusion it is. Baldwin delivers these answers, and argues them convincingly.”—Torsten Riecke, Handelsblatt Global

“The Great Convergence is an important text, because it argues for a change in the way we think about and deal with globalization. Baldwin disaggregates the monolithic, undifferentiated approach that considers globalization as a single phenomenon. Rather, the author argues that there are three major strands of globalization, and that these strands have been predominant during successive historical periods. First, globalization consisted of the movement of goods, then the movement of ideas/information, and, Baldwin posits, in the future the movement and enhanced functionality of people. Viewing globalization through this lens, supported by clear and lucid historical analysis, Baldwin’s view will cause the reader to think differently about trade agreement, government policy, the future of work, and other economic and political issues. This spirited thesis is presented with clarity in lucid and thoughtful prose that is accessible to all readers.”—S. A. Schulman, Choice

“In this meaty treatise, Baldwin argues that we’re in the process of a major shift in world economics and economic policy needs to be adjusted accordingly… Baldwin has put together an intriguing and compelling case.”—Publishers Weekly (starred review)

“The Great Convergence is important and accessible in equal measure, with a balance between examples presented as stories and analytics set out with clarity and verve.”—Paul Collier, University of Oxford

“This important book should change the way we think about globalization. There have been two big globalization booms over the past two centuries. The first caused divergence between rich and poor nations while the second, since the 1970s, has caused convergence. With elegance, economist Richard Baldwin tells us why.”—Jeffrey G. Williamson, Harvard University