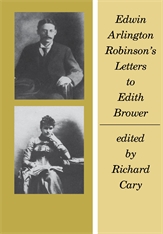 This volume contains 189 hitherto unpublished letters by Edwin Arlington Robinson. They were written between 1897 and 1930 to one of his first admirers, Edith Brower of Pennsylvania.

The letters begin when the twenty-seven-year-old poet writes gratefully to the stranger who has expressed appreciation of his first, privately printed, book of poems, The Torrent and the Night Before. Soon he was carrying on an intense correspondence, baring his soul—safely, he believed, because the woman he described as “infernally bright and not at all ugly,” with “something of a literary reputation,” was “too old to give me a chance to bother myself with any sentimental uneasiness.” (She was twenty-one years his senior.)

Continually reflecting his laconic, self-deprecating Yankee spirit, the letters range from the uncontrollable outpourings of a lonely individual, desperate for encouragement and understanding, to brief words of greeting or farewell. Without reserve, Robinson—who was eventually awarded the Pulitzer prize for poetry three times—confides his reactions to people and places, his thoughts about his own work, and his personal opinions of such writers as Browning, Dickens, Hardy, Moody, and Pater.

Mr. Cary has included Miss Brower’s unpublished memoir on the poet’s character and literary career, “Memories of Edwin Arlington Robinson,” and her penetrating review of The Children of the Night. In addition to an informative Introduction, he contributes full explanatory notes, a list of Robinson’s works, and an index.