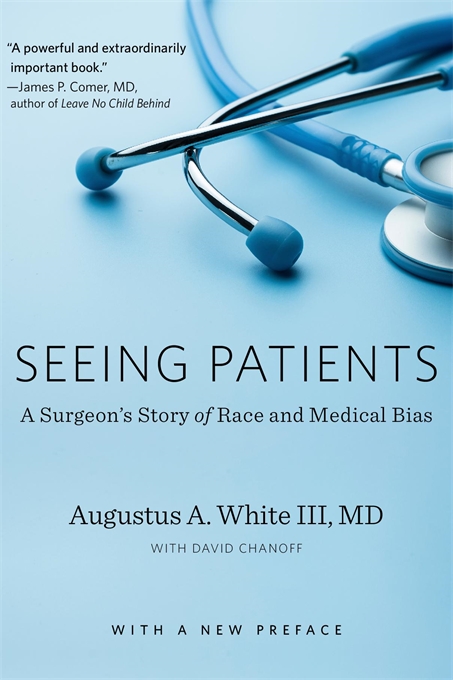 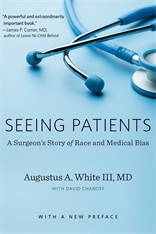 A Surgeon’s Story of Race and Medical Bias, With a New Preface

“White, noted professor of orthopedic surgery at Harvard University, addresses the pervasive but hidden problem of prejudice in medicine in this revealing book. He uses extensive research to show how subconscious stereotyping of Blacks, women, and other minorities influences the doctor–patient relationship and how many people, therefore, receive substandard treatment.”—Clarence Waldron, Jet

“White uses his unique insights to discuss health care disparities, making it timeless and a must-read book that has the power to change the way we see the world… As the coronavirus pandemic brings racial, economic, and health care disparities into stark focus, Seeing Patients impresses upon us the need to see each other as fellow humans.”—Mary E. Arthur, Anesthesia & Analgesia

“As vital to medicine as mapping the rhythm of the heart and the firing of the nerves is an understanding of the diversity of the human family. Gus White takes us on a marvelous personal journey that illuminates what it means to care for people of all races, religions, and cultures. The story of this man becomes the aspiration of all those who seek to minister not only to the body but also to the soul.”—Jerome Groopman, MD, author of How Doctors Think

“Seeing Patients is a powerful and extraordinarily important book. Dr. White uses his own experience to enable us to take a close look at the sensitive issue of bias in health care, and the damage it does. He knows from the inside how good people can be negatively affected by historical and cultural forces they are not even aware of. He acknowledges the magnitude and complexity of the problem, and encourages medical schools and physicians to work together to solve it.”—James P. Comer, MD, author of Leave No Child Behind: Preparing Today’s Youth for Tomorrow’s World

“Gus White has written a tour de force—a compelling story about race, health and conquering inequality in medical care. Growing up in the segregated South, receiving medical training at all-white Stanford, caring for Americans and Vietnamese in Vietnam, Dr. White has a uniquely perceptive lens with which to see and understand unconscious bias in health care. He offers astute analysis and prescriptions for eliminating inequalities, and his journey is so absorbing that you will not be able to put this book down.”—Charles J. Ogletree, Jr., author of All Deliberate Speed

“This is first and foremost the immensely enjoyable story of Gus White’s astonishing life’s journey. With all his achievements, he has not lost sight of his roots. Recruiting minorities into medicine has been one of his life’s priorities, and he has been a leader in promoting cultural literacy in all physicians. Seeing Patients is both exciting and insightful.”—Alvin F. Poussaint, MD, Professor of Psychiatry, Harvard Medical School

“The intertwining journeys of both orthopaedics and civil and human rights are chronicled in Dr. White’s life and career. Despite the progress made in these areas, unequal medical treatment in this country still exists due to biases, stereotypes, generalizations, language differences, and cultural barriers.”—Steven L. Frick, MD, AAOS Now

“White’s story—part autobiography, part call to action—is a compelling and often uncomfortable read about a hidden world where even the most compassionate and egalitarian caregivers often fail a basic command of the Hippocratic oath: to do no harm.”—Sean Silverthorne, Harvard Business School Alumni Bulletin

“Armed by the unique perspective afforded by being both within the American medical establishment and an African American whose grit and talent put him there, highly respected Harvard Medical School professor White is a crystal-clear visionary. The best means to improve health care for all, he says, is for medical schools to produce physicians who are not only scientifically competent but also equally culturally competent… Part stirring autobiography, part reasoned apology for egalitarian health care, White’s book makes a powerful case.”—Donna Chavez, Booklist

“White grew up in Memphis during the Jim Crow era. Affected deeply by the blatant racial prejudice he encountered in the South, as a student in Ivy League universities, as a physician during the Vietnam War, and as an orthopedic surgeon, White offers a deeply personal account. Part autobiography, and part sociological treatise on issues including race, the book chronicles how White’s epiphany in Vietnam (‘When I came out of that carnage in Vietnam, I came out with an even stronger sense that in the final analysis we are all so much more similar than different’) led to his realization that ‘the persistent derogation of out-groups’ results in unequal treatment of many categories of people. This understanding inspired him to become an activist dedicated to increasing knowledge and awareness of diversity issues. A fascinating account of how White became a professor of medical education/orthopedic surgery and the first African American department chief at Harvard’s teaching hospital, this book explains such sociological principles as race, class, and in-group/out-group processes in clear, uncomplicated prose. His a very enjoyable account of the remarkable life of an individual who did what a lot of people say they want to do: make a difference.”—C. Apt, Choice

“In this autobiography, White, Harvard’s first African American department chief, writing with Chanoff, chronicles his experiences growing up in Tennessee and his professional journey through medical school. Along the way, readers are shown how racism has impacted and still affects African Americans and others in the medical profession and in the medical system in general.”—A. W. Klink, Library Journal

“When White attended Stanford in the late ’50s he was one of four students of color. A recommendation letter written by a mentor then included ‘this is a pale, colored boy’ to avoid misunderstanding. Now White recounts his ground-breaking life in an engaging, matter-of-fact manner… A chance encounter with a woman who felt doctors judged her by her full-body tattoo led White to consider disparities in health care. Challenges exist on both sides of the stethoscope, White argues, noting that the uncertainty felt by many African-American patients over how they will be perceived also impacts the medical encounter; the burden for alleviating racial and other disparities (such as those based in age, gender, and sexual orientation) falls on the medical and educational communities. Accessible, thought-provoking, and valuable.”—Publishers Weekly