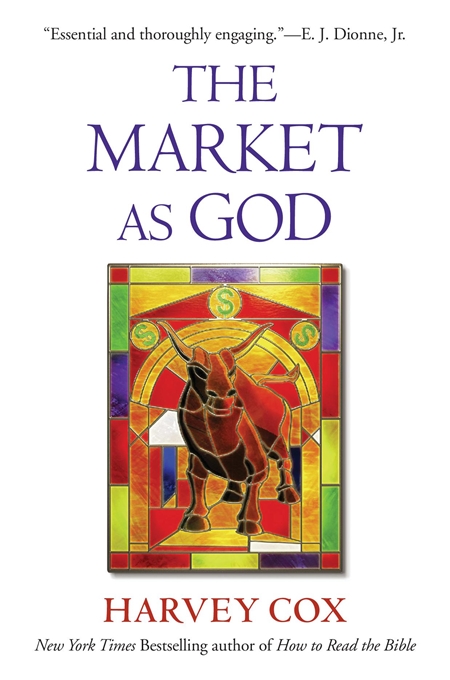 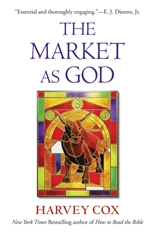 The Market as God

“Through an astonishingly productive lifetime, Harvey Cox has always been alive to the most important movements of the spirit in our culture. His observations on the deification of the market and his ingenious sense of how market theology has developed a scripture, a liturgy, and sophisticated apologetics allow us to see old challenges in a remarkably fresh light. Like so many of the market’s critics, he’s also trying to redeem it so that it might serve its proper ends. An essential and thoroughly engaging book.”—E. J. Dionne, Jr., author of Why the Right Went Wrong

“The Market as God attempts to begin…challenging how political liberalism constrains moral and religious critiques from entering the public sphere, and how economic liberalism—by insisting the market holds primacy above all—constrains us from building a more just and equal society… By highlighting the limits of our economic and religious lives, and by reminding us of our powers to renovate our current world, Cox clears the space for a new generation of Christians to begin to develop a more public and egalitarian politics. And that alone is more than enough to be grateful for.”—Elizabeth Bruenig, The Nation

“Cox creatively transposes the concepts of theology into the language of capitalism and argues that the metaphors of theology, and religion itself, are being co-opted… The Market as God might be an example of what Bonhoeffer meant when he proposed that theologians had to learn to ‘speak of God in a secular fashion and find a nonreligious interpretation of biblical concepts,’ an approach Cox encouraged in 1965. In turn, market boosters are theologizing by casting the Market as a Tillichian ultimate concern and a wiser Cox has returned to interpret the signs of the times. The Market, like all human artifice, is neither natural nor neutral but an object of moral reflection, and in emotive prose Cox offers a moral inquiry into its attributes… Americans are searching for a social vision that serves people against the rule of the Market God, and the impassioned and timely Cox has reminded us of the moral challenges of our economic life.”—Lilian Calles Barger, The New Rambler

“Writing with his customary verve and insight, Harvey Cox sees The Market as very much a religious phenomenon. As he puts it, it has deified itself and become a god to people who worship it…Cox is good at using religious concepts to explain economic thinking.”—Paul Richardson, Church of England Newspaper

“With his expansive knowledge of history, theology and religious studies, [Cox] is well-positioned to offer insights and revelations regarding this chosen task… Cox makes a convincing argument that the deified Market has produced a web of values, narratives and institutions that need critical reexamination.”—Melissa Jones, National Catholic Reporter

“With flashes of brilliance and focused energy, Cox charts the ways in which the Market became Divine and even achieved human status through the form of the corporation.”—Frederic and Mary Ann Brussat, Spirituality & Practice

“Over 50 years ago, Cox anticipated the cultural turn away from religion and toward secularism in his classic work, The Secular City (1965). In this exceptional book, he now turns his attention to economics and theology. In 2013, Pope Francis remarked in Evangelii Gaudium that the environment stands defenseless against a ‘deified market.’ With typical brilliance, Cox takes up the pope’s words and examines in sparkling detail the features of the market as a religion… Cox’s book is both timely and provocative.”—Publishers Weekly (starred review)

“The Market as God, like every book written by Harvey Cox, is stylishly winsome and socially relevant, brimming with Cox’s customary theological wit. There is a growing academic literature on how capitalism divinized the Market, but here the argument sings, with an underlying anger that sneaks up on you.”—Gary Dorrien, author of Kantian Reason and Hegelian Spirit

“Max Weber famously looked at religion through the prism of economics. Harvey Cox reverses the gaze and looks at economics through the prism of theology. In this very timely book, he formulates and then examines the equation Market = God in ways that are as original as they are brilliant.”—Arvind Sharma, McGill University