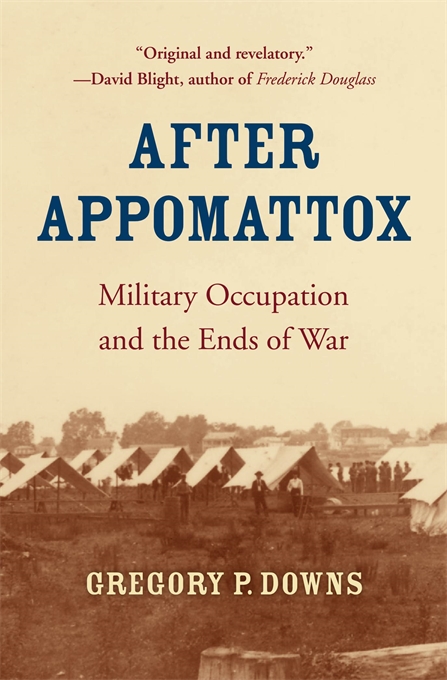 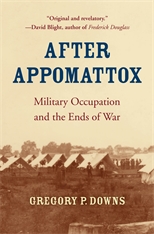 Visit the After Appomattox companion website, mappingoccupation.org, to explore the U.S. Army’s presence, movements, and impact during and after the Civil War

On April 8, 1865, after four years of civil war, General Robert E. Lee wrote to General Ulysses S. Grant asking for peace. Peace was beyond his authority to negotiate, Grant replied, but surrender terms he would discuss. As Gregory Downs reveals in this gripping history of post–Civil War America, Grant’s distinction proved prophetic, for peace would elude the South for years after Lee’s surrender at Appomattox.

After Appomattox argues that the war did not end with Confederate capitulation in 1865. Instead, a second phase commenced which lasted until 1871—not the project euphemistically called Reconstruction but a state of genuine belligerency whose mission was to shape the terms of peace. Using its war powers, the U.S. Army oversaw an ambitious occupation, stationing tens of thousands of troops in hundreds of outposts across the defeated South. This groundbreaking study of the post-surrender occupation makes clear that its purpose was to crush slavery and to create meaningful civil and political rights for freed people in the face of rebels’ bold resistance.

But reliance on military occupation posed its own dilemmas. In areas beyond Army control, the Ku Klux Klan and other violent insurgencies created near-anarchy. Voters in the North also could not stomach an expensive and demoralizing occupation. Under those pressures, by 1871, the Civil War came to its legal end. The wartime after Appomattox disrupted planter power and established important rights, but the dawn of legal peacetime heralded the return of rebel power, not a sustainable peace.