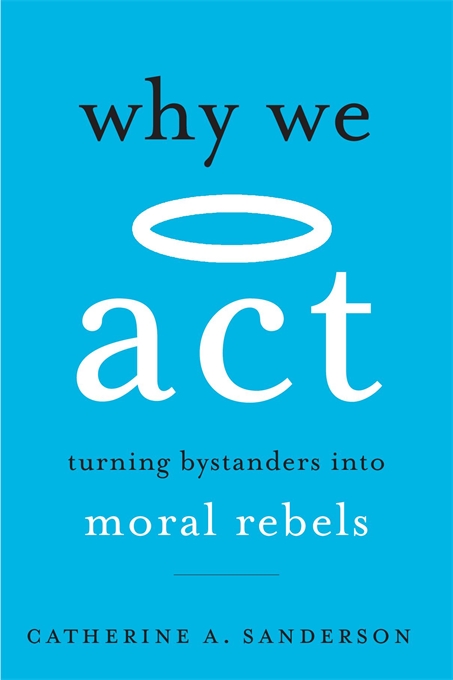 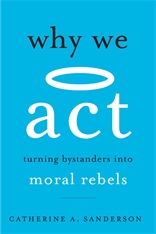 “Makes a powerful argument for building, as early as possible, the ability to stand up for what’s right in the face of peer pressure, corrupt authority, and even family apathy. Citing case after case revealing how easy it is for people’s moral instincts to be muted, and detailing how that silence is visible on brain scans, Sanderson guides readers toward her inevitable conclusion: We can do better, we know how, and the tipping point to convert a virtue-challenged culture into a virtuous one is closer than we think.”—Psychology Today

“Catherine Sanderson, like no other psychologist, invades our minds. Her riveting storytelling challenges us to rethink why we avert our eyes to evil, tolerate bullying, and excuse unforgivable workplace behavior. She plumbs the depths of social norms that too often prevent good people from being good and points to steps all of us can take to become ‘moral rebels’ whose voices can change society for the better.”—Walter V. Robinson, former editor of the Boston Globe’s Spotlight Team

“Sanderson’s discussion of the consequences of failing to exhibit moral courage felt ripped from 2020 headlines—all of them. It informed my thinking and conversations with everyone… It encouraged me to persevere through many moments when it felt far easier to stop trying.”—Christy E. Lopez, Washington Post

“Provides lessons from neuroscience to explain how some simple strategies can help us fight the pressure to conform and develop moral courage.”—Notre Dame Deloitte Center for Ethical Leadership

“Challenges readers to become moral rebels, foster empathy, and practice supporting others to do the same… The genius of Sanderson’s text lies in offering a recognizable picture of moral compromise and an accessible account of steps to counteract it, a recipe for change that offers hope.”—Choice

“Much of what enables evil people to do evil things is that we stand idly by and let them. In this powerful, well-written book, Catherine Sanderson explains what psychology has taught us about why good people so often do nothing and offers wise suggestions that will enable more of us to step up and be ‘moral rebels’ when the situation calls for it. If you have ever regretted being silent (and who hasn’t?) this is the book for you.”—Barry Schwartz, author of The Paradox of Choice

“In an age of government misconduct, corporate malfeasance, and #MeToo, it’s tempting to believe that bad things happen because of bad actors. But as Catherine Sanderson compellingly illustrates, these events aren’t just due to ‘a few bad apples’—they are enabled and sustained by good people who are complicit in behavior they know to be wrong. This book is a must-read for anyone who wants to understand why we can become silent bystanders to unconscionable actions—and what we can do to empower ourselves and others to speak out.”—Asha Rangappa, national security analyst for CNN and former FBI agent

“As unwilling witnesses to injustice, many of us have asked ourselves, ‘Why doesn’t someone do something?’ Catherine Sanderson answers this question of conscience in her powerfully persuasive book. This brilliant work stands at the intersection of social justice and social psychology. Using insights from academia, the torture chambers of Abu Ghraib, and crime scenes of police brutality, Sanderson analyzes the powerful forces that drive human beings to act against cruelty, injustice, and human suffering. The unrelenting rigor of her analysis, sweeping breadth of research, and evocative lucidity empower us to act—and also give us hope. This book comes not a moral moment too soon.”—Cornell William Brooks, Professor of the Practice of Public Leadership and Social Justice, Harvard Kennedy School, and former President of the NAACP

“I tend to assume that all that can be said about human nature was said by Aristotle. Catherine Sanderson has challenged my prejudice with this lively and engaging book full of interesting observations about human beings and their actions. Or has she ‘merely’ updated Aristotle through the lens of modern social psychology? If so, that’s a worthy achievement.”—William Kristol, Director of Defending Democracy Together

“Why do so many people stand silent when someone does something bad? If you find yourself increasingly asking that question these days, you’re not alone—and Catherine Sanderson has written the book for you. Why We Act reviews the social psychological literature—from Milgram’s shocking findings onward—to explain why people who know better sometimes give wrongdoing a pass, and applies the field’s findings to everyday life, like bullying in schools, fraud and harassment in the workplace, and our current political life. A clear and engaging writer, Sanderson offers sound advice on how we can become better at doing what we know is right.”—George Conway, cofounder of The Lincoln Project

“Bad things don’t happen only because of bad actors. They happen because good people choose to look the other way. In lucid prose, Sanderson explores why many avert their eyes in the face of immoral behavior, and offers strategies to help combat this pernicious tendency. Why We Act is an essential read for building a kinder and more ethical society.”—David DeSteno, Professor of Psychology, Northeastern University, and author of Emotional Success

“Our world is filled with evidence of cowardice and corruption. Catherine Sanderson explains why, drawing on decades of groundbreaking research. Why We Act offers powerful advice about how each of us can protect our integrity and improve our institutions. This is an urgent and compelling book with a clear agenda for concerned citizens.”—Jeremi Suri, author of The Impossible Presidency: The Rise and Fall of America’s Highest Office

“In this deeply researched, compulsively readable account, Sanderson offers a thoroughly persuasive analysis of why most people remain silent in situations where they—and we—know full well that their actions could prevent harm. More importantly, she provides a highly practical toolkit for cultivating empathy and learning to be a ‘moral rebel.’ A profound and timely contribution to the psychology of compassionate moral action in a heartless world.”—R. Marie Griffith, Director of the John C. Danforth Center on Religion and Politics, Washington University in St. Louis

“This is a rich, powerful, and wide-ranging exploration of moral courage, of inaction and action. It shows what stops people from helping—and what leads them to help others. These are tremendously important issues. The focus on training, and how to influence bystanders to act, is especially valuable.”—Ervin Staub, author of The Roots of Goodness and Resistance to Evil