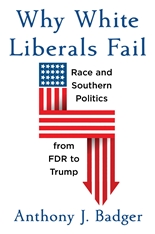 Race and Southern Politics from FDR to Trump

It’s not the economy, stupid: How liberal politicians’ faith in the healing powers of economic growth—and refusal to address racial divisions—fueled reactionary politics across the South.

From FDR to Clinton, charismatic Democratic leaders have promised a New South—a model of social equality and economic opportunity that is always just around the corner. So how did the region become the stronghold of conservative Republicans in thrall to Donald Trump? After a lifetime studying Southern politics, Anthony Badger has come to a provocative conclusion: white liberals failed because they put their faith in policy solutions as an engine for social change and were reluctant to confront directly the explosive racial politics dividing their constituents.

After World War II, many Americans believed that if the edifice of racial segregation, white supremacy, and voter disfranchisement could be dismantled across the South, the forces of liberalism would prevail. Hopeful that economic modernization and education would bring about gradual racial change, Southern moderates were rattled when civil rights protest and federal intervention forced their hand. Most were fatalistic in the face of massive resistance. When the end of segregation became inevitable, it was largely driven by activists and mediated by Republican businessmen.

Badger follows the senators who refused to sign the Southern Manifesto and rejected Nixon’s Southern Strategy. He considers the dilemmas liberals faced across the South, arguing that their failure cannot be blamed simply on entrenched racism. Conservative triumph was not inevitable, he argues, before pointing to specific false steps and missed opportunities. Could the biracial coalition of low-income voters that liberal politicians keep counting on finally materialize? Badger sees hope but urges Democrats not to be too complacent.