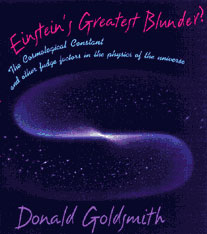 “It is not until you are well into the middle of the book, enthralled by galaxies and looking forward to the mystery of the missing mass, that you realize that you have been absorbed and that everybody else has gone to bed. Here is a first-class work, one of the best accounts of the successes of intellectual curiosity and observation about the universe and of how much more there is to find out. Exciting stuff.”—Roy Herbert, New Scientist

“[Goldsmith’s] first eight chapters, which are enough to make the book worthwhile, trace the development of astronomy from Copernicus to its modern form. The lucid text holds the readers’ hand through four centuries of astronomy… Then Goldsmith delves into current conundrums in cosmology… Fascinating… Because of its lively account of the history and physics of astronomy, the book will stand as an engaging account of what astronomers do and how the universe works—as far as we know.”—Katherine M. Reynolds, Boston Book Review

“Donald Goldsmith is one of the world’s great astronomy writers, and he shows why in his new book… The cosmological constant skewed Einstein’s equations and prevented him from foreseeing one of the grandest discoveries ever: The cosmos is expanding. Goldsmith discusses this and many other cosmological topics in his typically wry style.”—Keay Davidson, San Francisco Examiner

“For those seeking to know more about what scientists today think about the universe and why they think it, this well-illustrated book is an excellent place to start.”—Robert W. Smith, Air & Space

“A witty and succinct work on the problems of modern cosmology… In a rapidly changing field, this book captures the excitement and uncertainty of the science.”—Choice

“Goldsmith…tells us about the problems that cosmology is having thanks to the numerous discoveries made by the latest astronomical satellites… These contradictions usually find a fast reflection in the press and other broadcasting media, yet they are rarely treated in a coherent, precise way. Goldsmith not only makes us realise what appears to be not quite all right, but also he explains why and what could be, in some cases, the solution to the problem. Being an expert science writer, the author makes a wonderful job, while showing us everything we need to know about the question with great clarity.”—The Space Book Board [Barcelona, Spain]