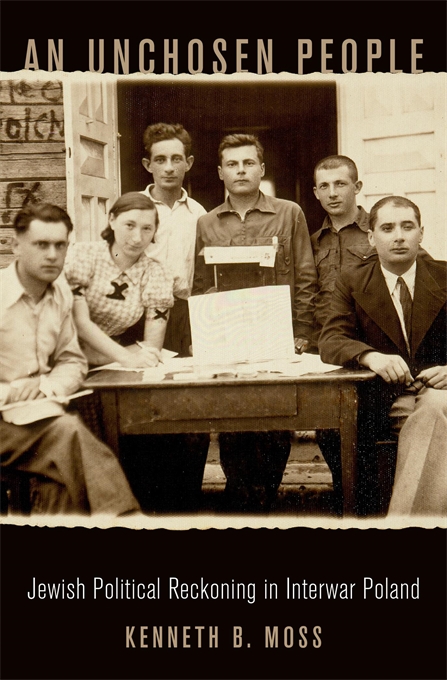 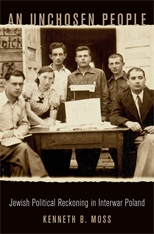 “One of the most important studies of Polish Jewry to appear in years, An Unchosen People is a deeply original exploration of how Jewish political thought in interwar Poland grappled with rising antisemitism and a growing sense of Jewish vulnerability.”—Samuel D. Kassow, author of Who Will Write Our History?: Rediscovering a Hidden Archive from the Warsaw Ghetto

“With stunning erudition and deep compassion for its subjects, An Unchosen People portrays an interwar Polish-Jewish community shaped and sustained by a sense of desperation in the face of a bleak future. Moss’s book bristles with insights about the relationship between global economic crisis, political extremism, and Jewish national identifications in the twentieth century.”—Derek Penslar, author of Theodor Herzl: The Charismatic Leader

“A profound, eloquently narrated study germane not only to the debates over the 1930s ‘Jewish Question’ but also to our engagement today with racism and political alienation. Moss makes clear that Jews were becoming increasingly convinced their identity-politics ideologies were no match for the incipient ethnochauvinism and fascism already ensconced in the politics of Central Europe. This is a work that resonates quite beyond Jewish history in addressing the precariousness of liberal and progressive ideals in illiberal times.”—Eli Lederhendler, The Hebrew University of Jerusalem

“A brilliant new account of Jewish political thought and activism in interwar Poland. Moss tells a troubling story of how a politically, socially, and religiously diverse Jewish community confronted questions about belonging and the possibilities for a future in Poland, Palestine, or elsewhere abroad. In the process he reframes the history of Zionism, diasporism, and interwar Polish-Jewish life itself. This is essential reading for anyone interested in Jewish history, East European history, and the history of minorities in Europe and beyond.”—Tara Zahra, author of The Great Departure: Mass Migration from Eastern Europe and the Making of the Free World

“A landmark publication that brilliantly reinterprets the arc of Eastern European Jewish history. Well before the Holocaust, Moss demonstrates, Polish fascism and antisemitism had bankrupted every extant Jewish political ideology—from Communism to Zionism to liberalism to religious Orthodoxy—leaving Polish Jews a futureless people as they entered the fateful era of war and genocide. Never have we had such a fine-grained historical analysis of the Polish-Jewish predicament framed against the backdrop of the crisis of Western modernity. The result is a revelatory book.”—James Loeffler, author of Rooted Cosmopolitans: Jews and Human Rights in the Twentieth Century

“An Unchosen People deftly illuminates the struggle of Polish Jews to come to terms with modernity in general and with the growing threat to their everyday existence in the crucial period of 1928–1935. Moss analyzes the complex arguments among Jews about how to meet the fearsome challenges of discrimination, racial antisemitism, and poverty that emerged with the Depression, the rise of Hitler, and the growing virulence of Polish nationalism. An essential read for any student of modern Polish-Jewish history.”—Norman M. Naimark, author of Stalin and the Fate of Europe: The Postwar Struggle for Sovereignty

“This fascinating, masterfully written book is a breakthrough in our understanding of Jewish political thinking in interwar Poland. Moss shows both the devastating effects of ethnic nationalism and fascism on Polish Jews and the novel ways in which Jews reacted. An essential work for readers interested in Jewish politics in Eastern Europe and issues of emigration and transnationalism, as well as crucial background for Polish-Jewish relations before and during the Holocaust.”—Kamil Kijek, University of Wrocław

“Moss has produced a grand history of Jewish political disillusionment—the equivalent of a photographic negative in which the polychromatic period of interwar Polish-Jewish history, full of cultural vitality, is transformed into a sepia-tinted frame marked by despair and fear for the future. In the spirit of Wilderson’s Afropessimism, Moss marshals his unparalleled skills as historian and thinker to capture an ominous and chilling moment of Judeopessimism.”—David N. Myers, coauthor of American Shtetl: The Making of Kiryas Joel, a Hasidic Village in Upstate New York