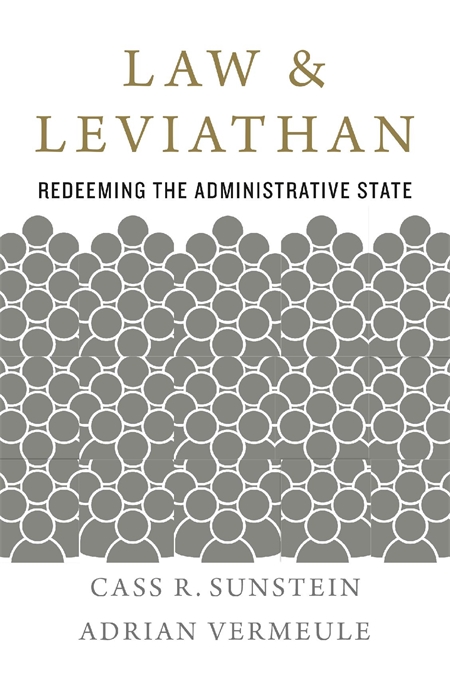 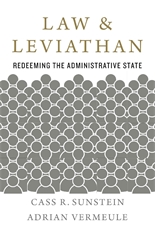 “Sunstein and Vermeule pack in a great deal of information, almost a thumbnail course in administrative law… For lawyers, the book provides an easy entry point to the latest developments in a complex and technical field of law… Put[s] forward a new analytical framework for thinking about the direction of the administrative state.”—Terence Check, Cipher Brief

“Law and Leviathan is a useful source to learn about the current state of US public law discourse. The reader can find an interesting mapping of concerns and solutions advanced towards developments which—to different degrees and under various labels—have taken place in most Western constitutional systems, as well as within the institutional structures of global governance.”—Angelo Jr Golia, Heidelberg Journal of International Law

“Has something to offer both critics and supporters of the administrative state and is a valuable contribution to the ongoing debate over the constitutionality of the modern state.”—Joseph Postell, Review of Politics

“This short book is as brilliantly imaginative as it is urgently timely. By identifying an inner morality of administrative law, Sunstein and Vermeule refute the most serious legal and political attacks on the administrative state since the New Deal. The book makes major contributions to the theory of the rule of law.”—Richard H. Fallon, Jr., Story Professor of Law, Harvard Law School

“This is a sparkling vindication of the enduring relevance of Lon Fuller’s classic account of the rule of law. It is an exemplary piece of legal scholarship in the way it connects a sensitive exploration of legal doctrine to underlying moral concerns.”—John Tasioulas, Director, Yeoh Tiong Lay Centre for Politics, Philosophy, and Law, The Dickson Poon School of Law, King’s College London

“In the face of decades of robust attacks on the administrative state as unconstitutional, immoral, or worse, Sunstein and Vermeule offer a doctrinally careful and theoretically sophisticated defense of pervasive administrative regulation tempered by the kinds of rule of law concerns associated with Lon Fuller’s internal morality of law. At no time more than the present, a defense of expertise-based governance and administration is sorely needed, and this book provides it with gusto.”—Frederick Schauer, David and Mary Harrison Distinguished Professor of Law, University of Virginia School of Law

“A must-read for critics and defenders of the administrative state.”—Jeffrey Pojankowski, Notre Dame Law School

“In this elegant and thoughtful book, Sunstein and Vermeule seek to offer an ‘appealing second best’ on which the administrative state’s friends and foes can agree. Whether they will succeed in that task remains to be seen, but their effort to move us past old debates is exactly right. The pandemic has shown the urgent need for an administrative state that is both lawful and effective, empowered as well as constrained. Sunstein and Vermeule offer us an insightful account of how that uneasy balance is attained through core principles emanant in administrative law.”—Gillian Metzger, Harlan Fiske Stone Professor of Constitutional Law, Columbia Law School