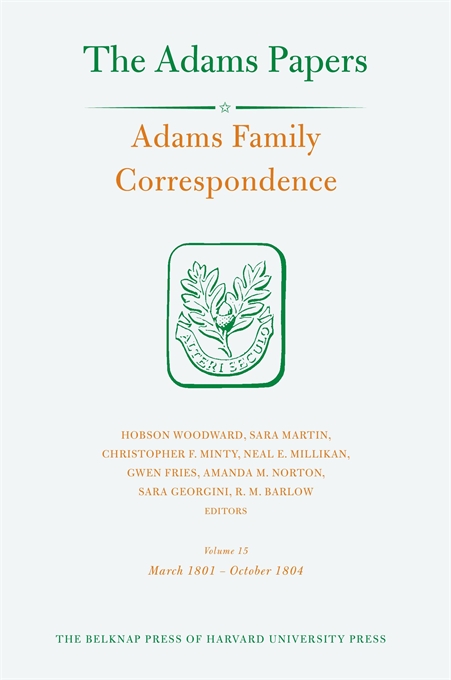 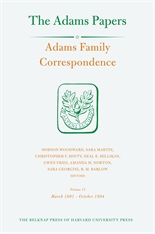 John and Abigail Adams remained fully engaged in American political life after they left Washington, D.C., for retirement in Quincy. A highlight of Volume 15 of Adams Family Correspondence is a series of letters between Abigail Adams and Thomas Jefferson that debated fundamental questions of the nation’s tumultuous early years. A new generation rose in prominence in the period covered in the volume, with John Quincy Adams returning from abroad to take a seat in the United States Senate just in time to break with the Federalists and support the Louisiana Purchase. The family commented on other events of the era—Jefferson’s dismantling of John Adams’s judicial reforms, the mobilization of the U.S. Navy for the Barbary wars, the growing bane of British impressment, and the duel that killed Alexander Hamilton.

Equally compelling family stories emerge in the volume’s 251 letters. The failure of a British banking firm proved calamitous to the family’s finances, compelling John Quincy to quietly finance his parents’ retirement. Thomas Boylston Adams, acting as an occasional editor of the Port Folio, carved out his public persona as a man of letters. Louisa Catherine Adams wrote of motherhood and adjusting to a new country of residence while providing a spirited perspective on Washington society. As always, the heart of Adams Family Correspondence is Abigail Adams, who survived a near-fatal fall to continue providing letters of insight and wit that once again show why the correspondence of the Adams family is a national treasure.