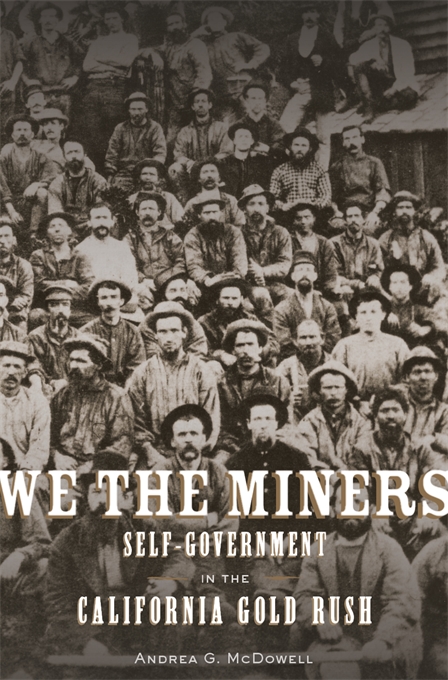 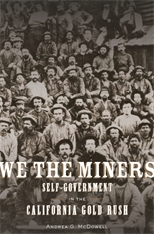 Self-Government in the California Gold Rush

A surprising account of frontier law that challenges the image of the Wild West. In the absence of state authority, Gold Rush miners crafted effective government by the people—but not for all the people.

Gold Rush California was a frontier on steroids: 1,500 miles from the nearest state, it had a constantly fluctuating population and no formal government. A hundred thousand single men came to the new territory from every corner of the nation with the sole aim of striking it rich and then returning home. The circumstances were ripe for chaos, but as Andrea McDowell shows, this new frontier was not nearly as wild as one would presume. Miners turned out to be experts at self-government, bringing about a flowering of American-style democracy—with all its promises and deficiencies.

The Americans in California organized and ran meetings with an efficiency and attention to detail that amazed foreign observers. Hundreds of strangers met to adopt mining codes, decide claim disputes, run large-scale mining projects, and resist the dominance of companies financed by outside capital. Most notably, they held criminal trials on their own authority. But, mirroring the societies back east from which they came, frontiersmen drew the boundaries of their legal regime in racial terms. The ruling majority expelled foreign miners from the diggings and allowed their countrymen to massacre the local Native Americans. And as the new state of California consolidated, miners refused to surrender their self-endowed authority to make rules and execute criminals, presaging the don’t-tread-on-me attitudes of much of the contemporary American west.

In We the Miners, Gold Rush California offers a well-documented test case of democratic self-government, illustrating how frontiersmen used meetings and the rules of parliamentary procedure to take the place of the state.