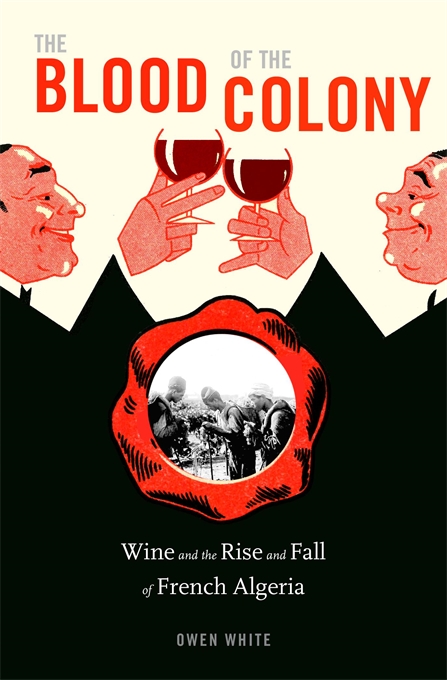 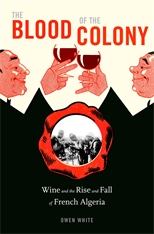 The Blood of the Colony

Wine and the Rise and Fall of French Algeria

“Handily brings together a history of wine—from unpromising beginnings, through phylloxera and the subsequent surge in production, to the travails of the interwar years and the eventual demise of viniculture—with a history of settler colonialism and all its contradictions… White has performed an admirable job and has served up a monograph that is scholarly in the best sense but also a real pleasure to read.”—Paul Nugent, Journal of Wine Economics

“A tour de force. This lively book explores the centrality of vineyards and wine to Algeria’s economy and society in a revealing, long-neglected story about the crown jewel in France’s colonial empire. White uses wine to shed new light on Algeria’s links with France, colonial labor relations, capitalism, and trade. He also engages with the history of science and technology and environmental studies while providing insight into a devastating war of decolonization and its fallout.”—Eric T. Jennings, author of Escape from Vichy: The Refugee Exodus to the French Caribbean

“Deeply researched and elegantly written, this is the first major work on wine in Algeria, which is surprising given the extent to which Algeria helped rescue the French wine industry from the crisis of phylloxera. White tells a story that is at once French and Algerian, but also global, seamlessly weaving together histories of agriculture, labor, political economy, environment, migration, race, and colonial governance. I highly recommend this erudite and compelling book.”—Mary Dewhurst Lewis, author of Divided Rule: Sovereignty and Empire in French Tunisia, 1881–1938

“A beautifully researched and lucidly written book. Explaining how and why wine became the lifeblood of French Algeria, White tacks gracefully between the local and the global, weaving social, economic, and political history into a comprehensive portrait of a settler society. A commodity history that is also a concise, accessible account of French colonization in North Africa and its legacies.”—Jennifer E. Sessions, author of By Sword and Plow: France and the Conquest of Algeria

“In tracing the emergence of Euro-Algerian viticulturalists and the wine industry they developed, White achieves a sweeping view of French colonialism in Algeria grounded in the everyday experiences of those who made and unmade the Algerian wine industry. Innovative in approach and impressive in scope, this important book will garner a wide readership.”—Elizabeth Heath, author of Wine, Sugar, and the Making of Modern France

“A superb, elegantly written history of colonial Algeria’s immense wine industry and its complex relationship to mainland France. In this landmark work in the history of empire, labor, and capitalism, White covers the full span of Algeria’s tumultuous colonial past, from French conquest to the first years of national independence. A tremendous achievement.”—Herrick Chapman, author of France’s Long Reconstruction: In Search of the Modern Republic

“This wonderfully insightful book shows us how wine production in Algeria became integral to France’s colonization project. As White makes clear, wine exports reconfigured Algeria’s economy within a fabric of colonial dependency. Little wonder that vineyards figured among the most decisive battlegrounds of the Algerian revolution. From start to finish, the detail is brilliant, the conclusions powerful.”—Martin Thomas, author of Fight or Flight: Britain, France, and Their Roads from Empire

“Through the prism of a single commodity, White offers new insights into the economics and cultural significance of French settler colonialism. An elegant and illuminating study.”—David Todd, author of A Velvet Empire: French Informal Imperialism in the Nineteenth Century