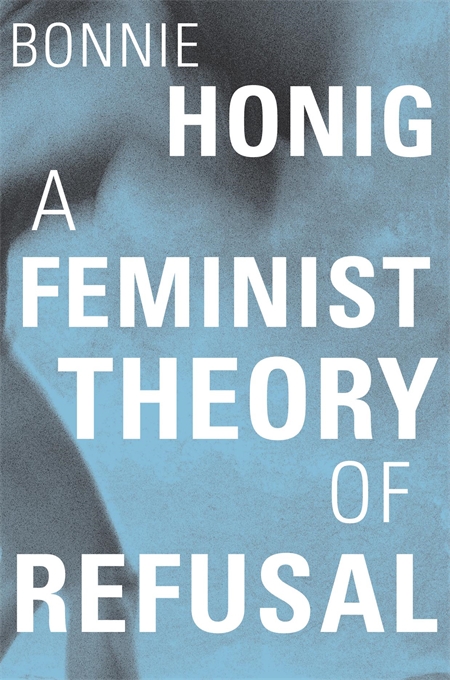 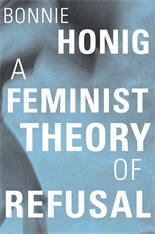 A Feminist Theory of Refusal

An acclaimed political theorist offers a fresh, interdisciplinary analysis of the politics of refusal, highlighting the promise of a feminist politics that does not simply withdraw from the status quo but also transforms it.

The Bacchae, Euripides’s fifth-century tragedy, famously depicts the wine god Dionysus and the women who follow him as indolent, drunken, mad. But Bonnie Honig sees the women differently. They reject work, not out of laziness, but because they have had enough of women’s routine obedience. Later they escape prison, leave the city of Thebes, explore alternative lifestyles, kill the king, and then return to claim the city. Their “arc of refusal,” Honig argues, can inspire a new feminist politics of refusal.

Refusal, the withdrawal from unjust political and economic systems, is a key theme in political philosophy. Its best-known literary avatar is Herman Melville’s Bartleby, whose response to every request is, “I prefer not to.” A feminist politics of refusal, by contrast, cannot simply decline to participate in the machinations of power. Honig argues that a feminist refusal aims at transformation and, ultimately, self-governance. Withdrawal is a first step, not the end game.

Rethinking the concepts of refusal in the work of Giorgio Agamben, Adriana Cavarero, and Saidiya Hartman, Honig places collective efforts toward self-governance at refusal’s core and, in doing so, invigorates discourse on civil and uncivil disobedience. She seeks new protagonists in film, art, and in historical and fictional figures including Sophocles’s Antigone, Ovid’s Procne, Charlie Chaplin’s Tramp, Leonardo da Vinci’s Madonna, and Muhammad Ali. Rather than decline the corruptions of politics, these agents of refusal join the women of Thebes first in saying no and then in risking to undertake transformative action.