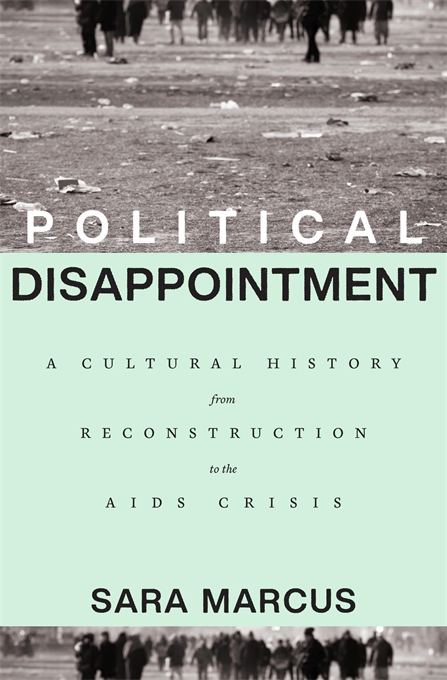 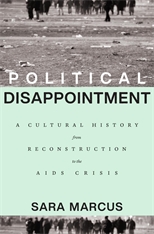 A Cultural History from Reconstruction to the AIDS Crisis

Moving from the aftermath of Reconstruction through the AIDS crisis, a new cultural history of the United States shows how artists, intellectuals, and activists turned political disappointment—the unfulfilled desire for change—into a basis for solidarity.

Sara Marcus argues that the defining texts in twentieth-century American cultural history are records of political disappointment. Through insightful and often surprising readings of literature and sound, Marcus offers a new cultural history of the last century, in which creative minds observed the passing of moments of possibility, took stock of the losses sustained, and fostered intellectual revolutions and unexpected solidarities.

Political Disappointment shows how, by confronting disappointment directly, writers and artists helped to produce new political meanings and possibilities. Marcus first analyzes works by W. E. B. Du Bois, Charles Chesnutt, Pauline Hopkins, and the Fisk Jubilee Singers that expressed the anguish of the early Jim Crow era, during which white supremacy thwarted the rebuilding of the country as a multiracial democracy. In the ensuing decades, the Popular Front work songs and stories of Lead Belly and Tillie Olsen, the soundscapes of the civil rights and Black Power movements, the feminist poetry of Audre Lorde and Adrienne Rich, and the queer art of Marlon Riggs and David Wojnarowicz continued building the century-long archive of disappointment. Marcus shows how defeat time and again gave rise to novel modes of protest and new forms of collective practice, keeping alive the dream of a better world.

Disappointment has proved to be a durable, perhaps even inevitable, feature of the democratic project, yet so too has the resistance it precipitates. Marcus’s unique history of the twentieth century reclaims the unrealized desire for liberation as a productive force in American literature and life.