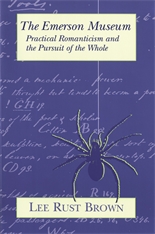 Practical Romanticism and the Pursuit of the Whole

In 1832, Ralph Waldo Emerson had come to a critical pass. He had lost his wife and was on the brink of leaving his career as a minister. In this reduced state he traveled to New Hampshire, where he made his famous decision to pursue wholeness—in his life and in his writing. This book reveals how Emerson went about achieving this purpose—and how he conceived a uniquely American literary practice.

Central to this project were the aims and methods of natural science, which Emerson discovered in spectacular form at the Museum of Natural History (Jardin des Plantes) in Paris exactly a year after his momentous decision. Lee Rust Brown describes Emerson’s use of these scientific techniques to integrate a disparate, constantly enlarging field of subject matter—ultimately, to reconceive himself as an institution of private research and public presentation not unlike the museum itself, methodically gathering specimens from the exotic frontiers of experience and setting them out, in their manifold affinities, on common ground.

The Emerson Museum shows how this undertaking transformed the legacy of European romanticism into a writing project answerable to American urgencies. The natural science of the time was itself informed by romantic demands for wholeness of prospect, and its methods offered Emerson a way to confront an American reality in which any manifestation of unity—literary, political, philosophical, psychological—had to embrace an expanding and fragmenting field of objective elements. In the experimental format of Emerson’s essays, Brown identifies the evolution of this new approach and the emergence of wholeness as a national literary project.