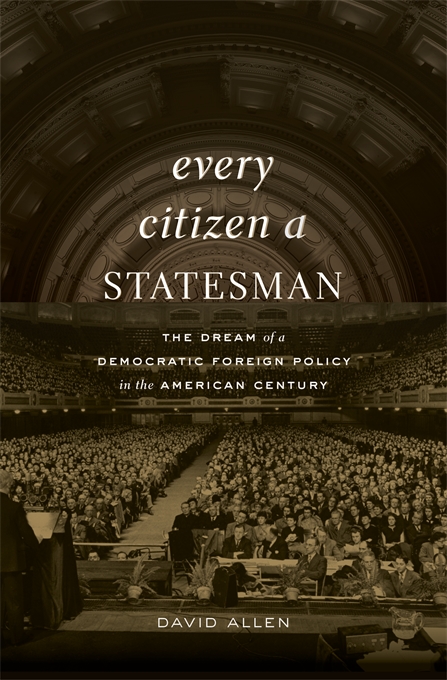 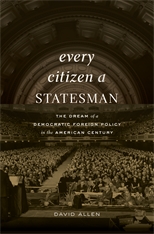 Every Citizen a Statesman

The Dream of a Democratic Foreign Policy in the American Century

The surprising story of the movement to create a truly democratic foreign policy by engaging ordinary Americans in world affairs.

No major arena of United States governance is more elitist than foreign policy. International relations barely surface in election campaigns, and policymakers take little input from Congress. But not all Americans set out to build a cloistered foreign policy “establishment.” For much of the twentieth century, officials, activists, and academics worked to foster an informed public that would embrace participation in foreign policy as a civic duty.

The first comprehensive history of the movement for “citizen education in world affairs,” Every Citizen a Statesman recounts an abandoned effort to create a democratic foreign policy. Taking the lead alongside the State Department were philanthropic institutions like the Ford and Rockefeller foundations and the Foreign Policy Association, a nonprofit founded in 1918. One of the first international relations think tanks, the Association backed local World Affairs Councils, which organized popular discussion groups under the slogan “World Affairs Are Your Affairs.” In cities across the country, hundreds of thousands of Americans gathered in homes and libraries to learn and talk about pressing global issues.

But by the 1960s, officials were convinced that strategy in a nuclear world was beyond ordinary people, and foundation support for outreach withered. The local councils increasingly focused on those who were already engaged in political debate and otherwise decried supposed public apathy, becoming a force for the very elitism they set out to combat. The result, David Allen argues, was a chasm between policymakers and the public that has persisted since the Vietnam War, insulating a critical area of decisionmaking from the will of the people.