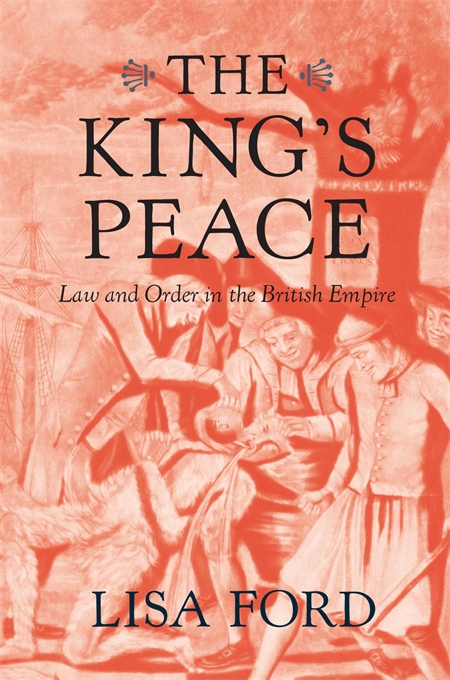 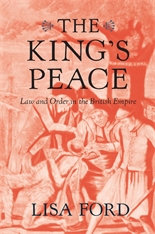 Law and Order in the British Empire

“Delivers on its claim to demonstrate a rising autocracy across the empire. This top-down story provides the perspective of British authorities. Ford is a compelling writer and each of the chapters draws on a wide range of archival and published sources… Any book that raises this many questions is certainly a valuable addition to undergraduate and graduate syllabi and is sure to generate productive historiographical conversations.”—Dana Rabin, H-Net Reviews

“The King’s Peace traces the British Empire’s increasingly authoritarian law and order from Boston before the American Revolution to Canada, Jamaica, India, and Australia during the first half of the nineteenth century. If making war was how Britain acquired its empire, keeping the peace, as Ford reminds us in this elegant and important book, was how the British justified their imperial persistence and rule.”—Eliga H. Gould, author of Among the Powers of the Earth: The American Revolution and the Making of a New World Empire

“Examining the heart of law—the king’s peace—Ford reveals its many moods during a period when Britain’s empire covered ever more peoples in ever more fraught circumstances. By telling us wonderful stories filled with fascinating characters, she has given us a major new global legal history of an era of rapid constitutional change.”—Paul D. Halliday, author of Habeas Corpus: From England to Empire

“In a wonderfully wide-ranging book, Ford argues that controversies over order and disorder not only preoccupied British officials, they also propelled reassertions of crown power, shifts to autocratic rule, legal divergences between center and periphery, and coercive peacekeeping across the empire. Powerfully argued and masterfully written, this book compels readers to grapple with the constitutional compromises made in the name of peace and good order.”—Hannah Weiss Muller, author of Subjects and Sovereign: Bonds of Belonging in the Eighteenth-Century British Empire

“A persuasive and elegant study of law and governance in the British Empire from the mid-eighteenth to mid-nineteenth century. Ford examines the legal slippages which occurred as imperial officials across the empire wrestled with the challenges of suppressing crime and disorder and maintaining the social order. This book will appeal to a wide range of readers interested in the British Empire, ‘war capitalism,’ and the nature of violence in imperial expansion.”—Aaron Graham, author of Corruption, Party, and Government in Britain, 1702–1713

“With global reach and local depth, this remarkable book fundamentally revises how we should understand the British Empire’s critical eighteenth-century transformations. In so doing, Ford makes a powerful argument for locating the violence that underpins modern state sovereignty not merely in its exceptions but its rule.”—Philip J. Stern, author of The Company-State: Corporate Sovereignty and the Early Modern Foundations of the British Empire in India