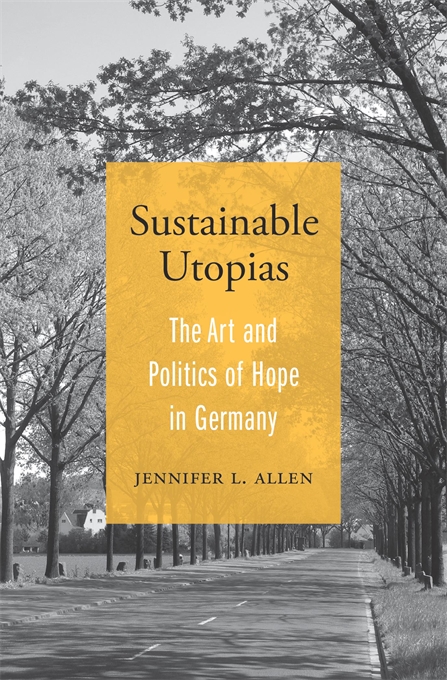 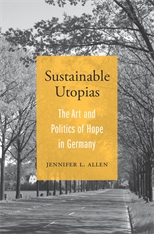 The Art and Politics of Hope in Germany

“Jennifer Allen’s splendid book on the survival and transformation of utopia in late–twentieth-century Germany announces a brilliant career. Far from dying, hope was rehabilitated in surprising places and projects across the divide of 1989, sheltered in fascinating new forms she intrepidly reconstructs in luminous prose. Those forms matter for their own sakes, and because the future does not just threaten catastrophe and desperation. It might also bring us within reach of stupendous and unexpected opportunity.”—Samuel Moyn, author of The Last Utopia: Human Rights in History

“Sustainable Utopias provides innovative insights into creative social movements that brought up a new artistic and democratic ‘history from below.’ Allen brilliantly analyzes different ways of coping with the German past that have shaped both the present and visions of the future. If you want to know how a new memory culture was created in the streets of Berlin, read this book.”—Frank Bösch, University of Potsdam

“Allen takes us deep into the intellectual world of West Germany’s left-liberal activist milieu. Against the backdrop of Helmut Kohl’s 1980s, she compellingly uncovers the utopian projects pursued by ‘spatial interventionist’ artists, the West Berlin History Workshop, and the Green Party. Sustainable Utopias is essential reading for anyone trying to understand contemporary Germany.”—Astrid M. Eckert, author of West Germany and the Iron Curtain

“In this excitingly multifaceted study of Germany in the 1980s and 1990s, Allen combines art and aesthetics with the social history of intellectuals and the emergent political forms of the time. She sees history’s epistemologies as intricately grounded not just in the period’s cultural and political climate, but in the working contexts and working practices historians and artists tried to develop.”—Geoff Eley, University of Michigan

“A fascinating, original study of ‘sustainable’ utopias in German society from the 1970s into the twenty-first century. Allen examines three utopian networks never before brought together under the same narrative umbrella. Instead of trying to create ‘heaven on earth,’ they had more adaptive and limited aims achievable not through the wholesale transformation of society but through repeatable micro-actions in small-scale venues. Based on impressive research, this book is an important contribution to the scholarship on German utopian thought and contemporary cultural and political history.”—Rudy J. Koshar, University of Wisconsin, Emeritus